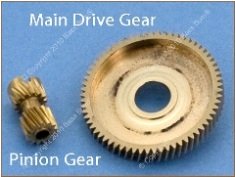 When anglers talk about fishing reel gear ratio in relation to a reel's speed or even its power, they often forget to include the reel's spool size in the equation. 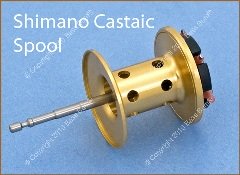 A reel's spool works in compliment to its gears. The gears and spool "together" determine the reel's true speed and power. But before we get into all that let's take a quick look at the fundamentals of gears. Don't worry, I'll keep it short and in language guys like you and I can understand. You know, non-engineer types.

A Little Lesson On The Fundamental Properties Of Gears

Certainly you all know what gears are and what they do. But in the interest of being thorough I offer this brief explanation. However, I also offer this disclaimer. I am not a mechanical engineer. As a matter of fact, when something breaks around our house the wife fixes it. I'm just a retired old salesman and avid bass fisherman. So here we go. Hope for the best. 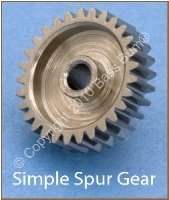 Gears are wheels, or discs, with teeth extending "radially" from their outer circumference. Most of us think of gears as the traditional spur gear, the classic cog-shaped gear with simple straight teeth like that in the picture right.

Some of us may also understand that "helical" gears have teeth that, while protruding from the gear radially, do so diagonally across the outside edge of the gear, rather than perpendicular to it. Helical gears tend to be quieter, smoother operating and longer lasting than spur gears. This is due to their broader distribution of force or load along the teeth. 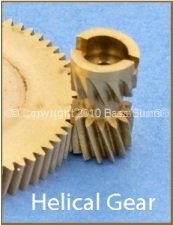 The complex shape of helical gears makes them more expensive than spur gears and are found in the more expensive reels. Well worth the money I say. Helical gears, when used on parallel shafts, operate just like spur gears, but offer smoother operation. They can also operate well at an angle. 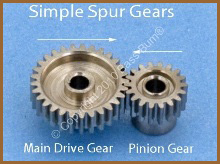 Gears are positioned in relation to one another so their teeth mesh together. Torque, a turning/twisting force, is applied to one gear, the driver", causing it to turn. It in turn transfers motion to the other gear, the "driven" gear. The driven gear turns in the "opposite" direction of the "driver" gear.

There you have it. That's the best I can do fellas.

Now, what Does This Gear Stuff Mean To You and Your Reels?

First, a functional characteristic of gears that is important for bass fishermen to understand, in relation to fishing reel gear ratio and how it relates to their reel's performance, is that you can not increase speed or power without reducing the other. Gearing up, that is, increasing the number of complete revolutions (speed) of the spool per crank of the handle, will decrease its power and vice-versa. Reducing the number of revolutions increases power but reduces speed. This is where fishing reel gear ratio comes in. Low gear ratio equals power, high gear ratio means speed. Think, race cars go fast but can't pull any weight while big trucks can pull heavy loads but can only move slowly. 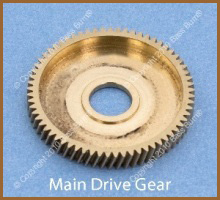 So the function of gears, and we're talking here about gears in fishing reels, is to produce either power or speed in the spool. In fishing reels there are two "primary" gears. The larger of the two is the "driver" or "input" gear. It can appropriately be called a wheel, even a disc, as illustrated in the picture right. 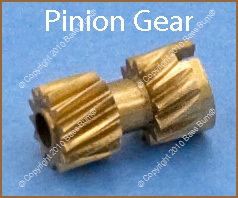 The other gear, the "output" gear, is much smaller. It's known as the "driven" gear. That is, the gear that is turned (driven) by the rotational force of the larger gear. These are identified as the main and pinion gears respectively. 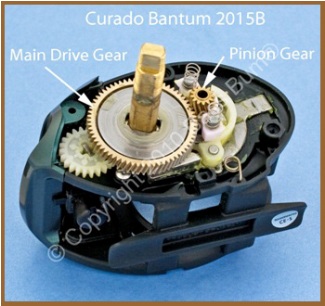 Both the main drive and pinion gears are spur gears, the most simple of gear types. These gears are positioned on parallel axles in the same plane so their teeth mesh. This is clearly illustrated in the photo above. When the angler turns the reel's handle, which is directly linked to the main "drive" gear, it acts directly on the "main drive gear" turning it.

Functionally, this means that when the larger drive gear, which is linked directly to the reel handle, is turned one full revolution by the handle, the smaller pinion gear, which connects to the spool, turns six revolutions causing the spool to do the same.

Note that the first number of a fishing reel gear ratio relates to the smaller "pinion gear" or driven gear. The higher that number the faster the spool retrieves line. If the number is low the spool turns slower and the rate of line recovery is less.

IT'S NOT JUST ABOUT GEAR RATIOS

It's Also About "IPT" (Inches Per Turn), The Rate Of Line Recovery

A fishing reel's gear ratio is not the singular determination of its speed. Another factor that is often overlooked is the "IPT", "inches per turn" measure. This refers to the number of inches of line recovered with each full revolution of the reel's handle.

Unfortunately, the reel manufacturing industry is not standardized on speed and fishing reel gear ratio. Each handles it a bit differently. The size of a manufacturer's spool in any particular reel and its line capacity will more often than not be different from those of other manufacturers. Two reels with the same gear ratio but spools of different circumferences will recover line at different "IPT" rates. This is even characteristic of different reel models of the same manufacturer.

Some companies have tried to clarify the confusion of fishing reel gear ratio and reel speed/power. They now provide anglers the amount of line that is taken up when you turn the handle one revolution. This tells the reel's "real" speed. For example, look through any fishing tackle catalog. You will find both the fishing reel gear ratio and the line recovery number noted for each reel on a page. If you're comparing reels you have to look at both numbers.

This explanation of fishing reel gear ratio could easily get mired down in words like... mechanical ratio relative to the gears and spool size which creates a geometric ratio as to the amount of line that is recovered with a single turn of the handle... yadda, yadda, yadda. Uh? Say what?.

Listen, it's very simple. If you want to know the speed or power of a reel you have or one you're contemplating purchasing, consider both "gear ratio" and "line recovery" numbers. That will tell you all you need to know. The following table illustrates differences in "IPT" line recovery for 6.2:1, 6.3:1 and 6.4:1 gear ratios.

What Fishing Reel Gear Ratio Is Best For Which Lure Presentation?

5.0:1 This range of gear ratios and those lower than this, have always been considered as crankbait lures, especially for deep divers. With the appearance of swimbaits the past few years it has grown in favor with many angler's for fishing the usually large and heavy swimbaits. If you're fishing big lipped, deep diving crankbaits or one ounce bottom hugging spinnerbaits choose a reel with a gear ratio between 5.0 and 6.0. Anything higher will likely wear your wrists and hands down to a nub by day's end. I've found the Abu Garcia® Revo Winch that has a 5.4:1 gear ratio to be a great choice when a "slow speed" reel is needed.

Generally, reels within the low speed range of gear ratios, around 5.4:1, will recover 20"-24" of line for each complete crank of the handle.

6.0:1 The 6.0 range is probably the most widely used baitcast fishing reel gear ratio. Fast, but not excessively so. A good choice for buzzbaits, spinnerbaits and lipless crankbaits. Those of us that flip and pitch find the 6.0 range of gear ratio fits the bill nicely, though many now use a reel in the 7.0 range. It's good for jigs, plastic worms, Carolina rigs and lipless crankbaits as well. Actually, this gear ratio can be used for most any application, especially if you are adept at controlling your cranking speed.

7.0:1 High speed fishing reel gear ratios are becoming more and more prevalent in freshwater baitcast reels. Some anglers use them when "burning" spinnerbaits or crankbaits. Others find them very handy in catching up with bass who run directly at the boat, as many large bass will do. If you're fishing fast, covering a lot of water searching for bass, this gear ratio allows for rapid line recovery and an increased number of casts.

Generally, reels with gear ratios in the 7.0 range will recover 28"-31" of line for each complete crank of the handle. Remember, high speed reels sacrifice "power". Something you might wish you had if hooked up to a really big "hawg".