Enter any tackle shop and you will find an overwhelming selection of fish hooks from which to choose. It will make your head spin around 360°. Remember the movie "Exorcist"? Jeez, what a scene that was!

Is this plethora (a fifty cent word meaning "a whole bunch") of fish hook styles simply manufacturer marketing? Perhaps a little, but much thought and testing has gone into the design of each shape and style.

You'll find fishing hooks with straight shanks, offset shanks and twisted shanks. There are wide-gap, octopus hooks and circle fishing hooks. They come in thin wire, thick wire, weedless and wacky styles just to name a few. Whew! How do you know which is for what purpose?

Well, they're all intended for one thing. We all know what that is, to "hook a bass" by effectively penetrating their very tough mouths. How each hook style accomplishes this is what makes one style more effective than another with any given technique.

Let's look at the basics of fish hooks.

Anatomy of a Hook 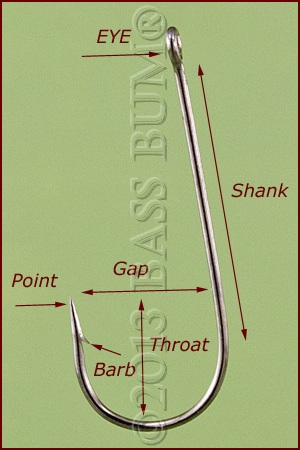 The point penetrates the bass' mouth and is manufactured in numerous variations. The longer it is the longer it will take for penetration. Most important is that the point is always sharp. So always have a fish hook sharpener handy.

Thick wire fish hooks will not penetrate the tough cartilage of a bass' mouth as well as a thinner wire hook. Furthermore, if the hook has a large barb, penetration can be impeded resulting in a poor hook set. Some companies are reducing barb size to what is referred to as a mini-barb because of this.

There are numerous types of hook points. Some of the most common are:

Most fish hook points incorporate a barb. This little piece of steel, formed by cutting a notch in the shaft, holds bass on the hook after penetration. The larger the barb the better it will function to hold the bass on the hook but as stated earlier the barb also has the potential of causing poor hook sets.

Catch and release guys will sometimes flatten barbs with pliers or file them down. Doing so makes for easier hook removal, especially if the bass has swallowed the hook.

The shank of a fish hook, the section between the eye and the bend beginning the throat, is either straight or curved. Sometimes there are "barbs" cut into the shank intended to keep soft baits on the hook.

There are regular, short and long shank styles in both straight and "offset" configurations. 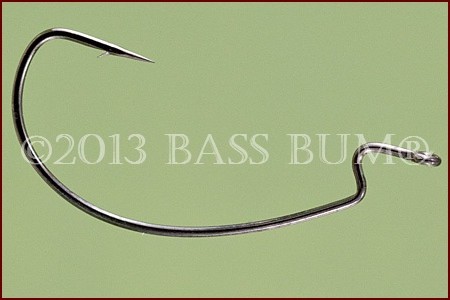 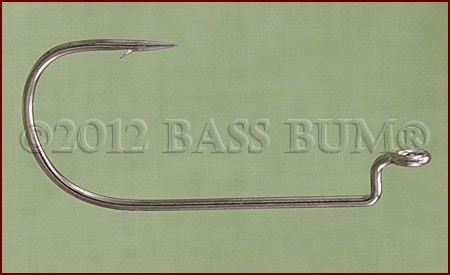 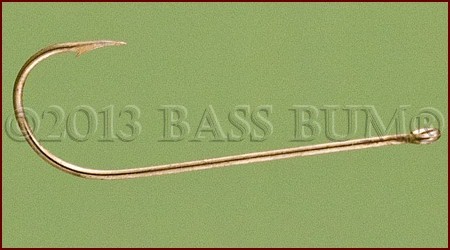 Some anglers feel simple straight shank hooks, like the one on the above, increase hook sets over curved and offset shank styles. Why? It's believed that on the hook-set a straight shank hook will "meander" in the bass' mouth seeking a surface into which it can set.

With offset shank hooks the point follows the eye and if the bass hasn't closed its mouth all the way the hook may slip through its lips if in the wrong position. Some feel this style hook may also push the bass' mouth open causing a missed hook-set. 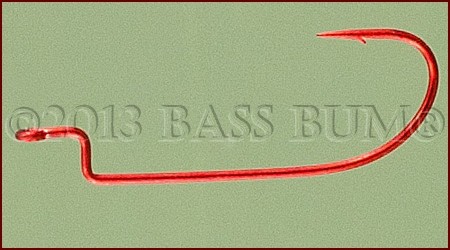 Offset shank hooks with their "Z" bend behind the eye are easy to rig with soft plastic lures. Push the point around 1/4" into the bait's head up to the hook bend then push out the point at a 90° angle. Turn the bait on the hook shank and push the body of the plastic lure up and over the Z bend and knot and you're ready to go.

Additionally, it is quite easy rig the lure in a straight line doing this with an offset hook whereas it is very difficult to do so with a straight shank hook. Rigging soft plastics like lizards, worms, stickbaits and flukes straight is very important if you want to avoid line twist and achieve maximum action from artificial baits.

The place where line is tied to the hook. If you're an old guy like me it's also the source of much aggravation as the old "peepers" aren't what they once were.

The "ringed" shape is the most common and is formed by bending the shaft in a uniform loop that rests against the shank forming a circle. There is also a "tapered" version of the "ringed" eye. It will taper from a point of about 4:00 on the bended ring to the end where it touches the shank. Though this is most often found on hooks designed for dry flies though I've found it on hooks for bass like the Gamakatsu "shiner hook". 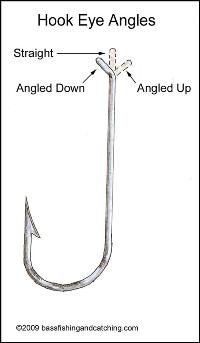 What's the purpose in doing this? Is there any advantage of one style over the other? The theory, and I emphasize theory, behind these three eye angles is this.

This is the distance from the fish hook point to the shank. The gap of a hook is very important to its ability to grab and hold a fish. Small gaps are not as effective at this as are large gaps. Some anglers will bend out the hook's gap 5-10 degrees thinking it will improve hook ups. I figure the hook manufacturers knew what they were doing and I leave well enough alone.

Unfortunately there is no uniform system for defining fish hook measurements. So pay close attention when buying hooks from different manufacturers. They're all different.

This is the distance from a line drawn between the point and shaft (apex of the bend) to the bottom of the fish hook's curve. This distance is very important and must be deep enough for flesh and hard cartilage to pass the barb.

A Size 34 Hook Is Smaller Than A Size 6 Hook? Wait A Minute!

What about fish hook sizes? I know it's confusing, but the larger the number of a hook, the smaller it's actual size. Sizes begin at 32 and go to size 1 getting larger as they go, where they then become 1/0 or "one aught" and progress upward in size to a size 20/0 or "20 aught".

For smallmouth and largemouth bass fishing the most appropriate sizes will be sizes 4, 2, 1, 1/0, 2/0, 3/0, 4/0, 5/0 and 6/0. Of course, the size varies depending on the technique you're using and fish hooks that are smaller or larger than this range are sometimes used.

Bear in mind that there is no industry "standard" as to fish hook sizes so a 2/0 from one company may be larger or smaller than a 2/0 from another. 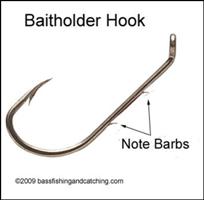 Baitholder Hook - These hooks are designed primarily as "live bait" hooks. They have barbs on a long shaft which serve to prevent live bait from wiggling free. Bass fishermen use this hook in sizes 1/0 and 2/0 for minnows and shiners. Walleye fishermen will get bait hooks as snells pre-tied with line and smaller 8 or 10 size hooks. 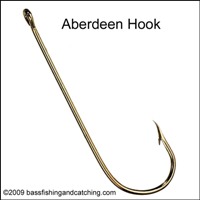 Aberdeen Hook - Another hook that is used for live bait. These are light wire hooks with a pronounced round, maybe even very slightly squared, bend. They have a wide gap between the shank and point which accommodates baiting minnows. Because they are light wire they do little damage to live bait when placed on the hook. This prolongs lively action.

Aberdeen fishing hooks used for bass are usually sizes 2 through 4/0. 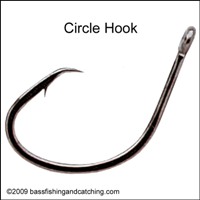 Circle Hook - Long used in saltwater fishing and when targeting catfish, pike and muskie, these are now becoming quite popular with "catch and release" bass fishermen. It is another live bait fish hook that when fished correctly will not result in bass swallowing the bait and becoming "gut hooked".

These hooks are available in thin and thick wire models and are generally found in sizes 1/0 through 8/0 in heavy wire and sizes 8 through 1 in the light wire version. 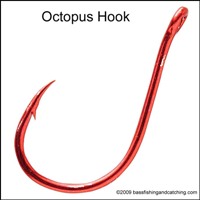 Octopus Hook - The name conjures up visions of a hook with eight points but it has only one. Similar to a "circle hook" it features a short shank and somewhat rounded shank that extends into it's bend, though to a much lesser degree than a circle hook.

This style fish hook is also a good live bait hook due to its lighter weight. They are usually available in sizes 6 through 5/0. 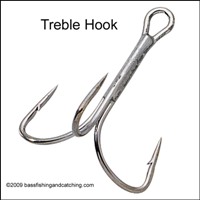 Treble Hook - Treble hooks have three points on three shanks and in the world of bass fishing are found on topwater lures, hard jerkbaits, crankbaits and topwaters like Zara Spooks.

Treble hook sizes on such lures are usually 1 to 2/0. 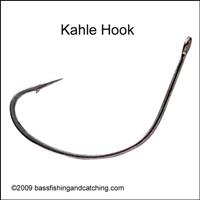 Kahle Hook - A unique hook that has an elongated wide gap that places the hook point farther back in the bass' mouth. These are available with a straight and upturned eyes. As for sizes, when fishing for smallmouth use sizes 2 and 1. For largemouth use 1/0, 2/0 and 3/0.

I use these exclusively for shiner fishing. If carefully watched you will not have any gut hooked bass. There is no need to let the bass "run" after taking the bait. As soon as you feel the strike set the hook. Nine times out of ten you will hook the bass in the lip. 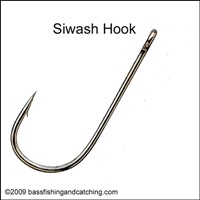 Siwash Hook - A very hard hook designed primarily for commercial fishing for large fish with tough mouths. It has a substantial round bend and long point.

"Trailer hooks" used with spinnerbaits and buzzbaits are in effect Siwash hooks. 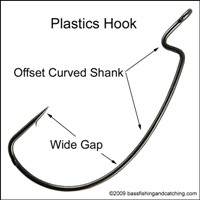 Worm Hook - The "worm" hook is really a hook for "soft plastic" lures of all kinds. They are available in many shapes and sizes and are designed for durability and deep penetration. The one shown at right is used for Texas rigging baits. Most are "wide gap" models and most often have offset shanks.

Sizes used for bass fishing range from size 2 up to size 8/0.

What Is A Circle Hook? When Do You Use Them?

Return To Bass Fishing And Catching From Fish Hooks