Fishing Plastic Worms That Is

I've heard it said that fishing worms, plastic worms, is easy. That it's not complicated. A plastic worm is a plastic worm and all are fished the same way.

My humble opinion? Sure, any plastic fishing worm has the "potential" to catch bass. I hear a "but" in your voice. Well, that potential is just that, potential. This alone is nothing that will catch bass.

Actually, converting the "potential" of plastic worms to catch bass, into actually catching bass is not that easy.

Mr. Plastic Worm - This Is Your Life

Remember the television show, This Is Your Life? It was a good one in its day. Let's take a quick look at our old buddy the plastic worms life story.

Plastic fishing worms have been around for 60 some odd years. Some say since the 1940's when Creme Lure Company was created in Ohio and molding worm baits began. Nick Creme, who was a machinist, who had access to folks in the rubber and chemical industry. The first worms were three hook worms, that is, they had three hooks "harnessed" or threaded through the body. A design still available today and sometimes used as a "swimming worm".

The first mold was created from, believe it or not, a live worm. These first worms were, though effective, quite hard and had a less than endearing smell to them. These two issues were addressed by Tom Mann around 1966-67. He added flavors to the plastic of which there were three colors, purple, black and red. This is the time when plastic fishing worms began to be produced by injection molding. This in turn created a method of producing many different shapes.

So, in the 1970's there began to appear designs other than the straight worm. For example, worms that had curly or ribbon tails were introduced. These were intended for anglers who "swam" there worms and desired more "action".

Through the 80's and 90's the humble straight worm continued its evolution developing and evolving, becoming softer, more flexible, sometimes buoyant and even impregnated with salt, attractants and other substances. The variety of shapes that have evolved is overwhelming. They can be found thin, fat, tapered, ribbed or smooth. Worms are available in lengths of 3" to 12" or longer, though those between 4"to 6" remain the mainstay.

Now, despite the vast selection of worms available to the angler today, there are those that say, a worm is a worm no matter what the shape and that it makes little difference which is fished so long as it's 4"-6" long. I don't know about the rest of you, but I've seen many the day when one worm style wouldn't catch on a branch while another had bass standing in line to suck it up.

There isn't anything scientific supporting that. Just my experience that's enough to convince me all worms are not the same. I bet many of you can say the same.

Classics, the worms that started it all. The granddaddies are, as pointed out above, the Creme and Jelly Worms.

But before we delve into the actual fishing of plastic worms we should take a look at several of the dominant categories and styles of worms on the market.

Finesse Worms - This category has grown in prominence as many reservoirs across the country have aged and in so doing have lost wood cover, grass and other forms of cover and transitioned into rocky structure and clear water. Typically these are straight tail worms, that require a bit of "working" on the part of us anglers to give them life. Some have slightly bulbous ends while others are tapered to a point. These worms are best when fished in the following manners and situations:

Jigworms - Have been in use since the mid 1950's primarily for largemouth bass and have been seen as such for many years. However, this worm technique, like most others, has evolved over the years. They are used heavily for smallmouth these days, though in shorter lengths than when targeting largemouth.

The most recent iteration of the jig worm is the "shaky worm". This is a worm technique that produces well when fished along vertical structure. This could be bluff walls, rip rap walls and creek channels. 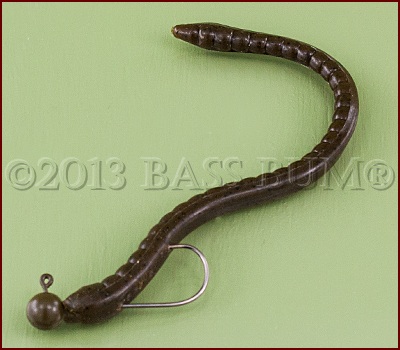 Action Worms - This category of plastic fishing worms usually has small sickle or long ripple tails. Sickle tails put out a constant, subtle pulse when steadily retrieved. These worms excel in clear water. Long ripple or ribbon tails wave through the water like a long thin banner being blown by the wind. This creates water disturbance that bass can notice and zero in on before seeing and striking.

Jumbo Worms - These worms, generally considered those 10" or longer, have been used since the 1970's. Used to target large bass in western reservoirs in California or Mexico they seem to have made a move into eastern and south eastern waters. Many are attaining success with these bigger worms where Florida strain bass are not found. The theory is that bass that are pounded by middle of the road worms, those 6" to 7" in length, are triggered to strike worms that are found on the extremes. Thus, small finesse worms and the very large worms are of more interest to hungry bass.

Straight Tail - These fishing worms are sometimes called "do-nothing worms or stick-worms and are the worm of choice for "wacky style' worm fishing. They can be very effective pre-spawn when the bass are still a bit sluggish and aren't into chasing food. The Zoom Trick Worm is one of the most recognized of this type plastic worm. A lift and drop retrieve is a great way to fish straight tail worms, especially in highland reservoirs that are heavy on rocky bottom structure but short on cover.

These are also good when fishing worms Texas rigged with a wide gap hook. When fishing it like this make sure you do so "weightless". This insures a slow fall and enables you to use it as a search lure by fan casting to find fish when you don't know the depth the bass are holding. These are also the worm most often used when fishing a "floating worm". They don't really float but are fished weightless just under the water's service.

Included in this group of fishing worms are what are sometimes called "cigar" worms, the most notable of which is the Senko which is a great wacky rig soft plastic. The original Senko is the fatter of the straight worm category.

Ribbon-Tail or Ripple-Tail - Use as a search lure by continuously casting and retrieving it. The long tail will twist as it's retrieved creating both a visual trigger and vibration, both of which attract bass. These are good for open water fishing and for working close to laydowns and other submerged wood.

Paddle-Tail - A frequent choice of professional anglers when fishing worms because they can be fished quickly and through many type covers. The name is obvious, just look at the tail. A worm style that is often used in shallow water and in weeds. It's a good style for retrieving as a swim worm, that is, straight back on or just below the surface. The paddle tail generates water displacement by flopping and vibrating giving it good action that triggers reflex strikes by bass.

French-Fry - This worm, if you can really can call it a worm, is best used at the end of a Carolina Rig. The structure of this lure results in a very erratic action when pulled along on a Carolina Rig.

Gator-Tail or C-Tail - A great design for river fishing when Texas rigged. A lift and drop retrieve causes the acutely curved tail to generate water movement that attracts bass.

I have no idea why some call this a gator tail or even a c-tail for that matter, but here it is. Anyway, because of the action of the tail, it's a good worm for retrieving with a swimming action over and around structure and cover. This style can be found in numerous lengths.

Curl-Tail - A worm style that has a smaller curled tail than gator or ribbon tail worms. These worms have a natural look to them and the smaller curled tail contributes just enough action to make them interesting to bass. It's a good worm for targeting specific targets like stumps, laydowns or dock pilings when fishing worms.

Techniques and Tools for Fishing Worms

Now that we've familiarized ourselves with many of the type plastic worms you have available for fishing worms we'll look at some of their specific applications in following pages. In so doing we'll also look at the various techniques to employ.

We'll also take a look at the rods and reels that are most appropriate for specific worm fishing situations.

Return To Bass Fishing and Catching from Fishing Worms