Finding Them Is The Challenge, Not Enticing Them To Strike

If the largemouth bass is the "brute lion" of freshwater bass, the smallmouth bass is the "cheetah", sleek, elegant, fast and an aggressive striker. It's known for its aerial acrobatics and often rushes straight for the surface when it feels hooked, often entertaining the angler with one or more jumps.

If hooked in deep water it may head, not to the surface, but to the nearest cover frustrating our efforts to land it. It's powerful "runs" excite but scare the begeesus out of us that it will break our line. A smallmouth never submits without a terrific fight!

Learning how to fish for smallmouth, whether river smallies or lake bronzebacks, is done by using both live bait, like live crawfish, live minnows, a hellgrammite or leech and artificial lures such as spinnerbaits, crankbaits, swimbaits and soft plastic lizards.

Though coloration can vary widely, smallmouth usually have dark brown backs and side coloration that is brown /bronze giving them their nickname "bronzeback" or "brownie". In some waters they may have a green tinge. Their sides also have dark vertical bars and diamond patterns. The gill covers will usually have three horizontal bars seemingly radiating from its often red eyes. The belly is white to light yellowish. 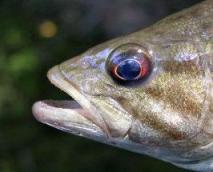 The mouth, though not small, is not as large as that of a largemouth. It extends only to the center of the pupil, never beyond that. It's also has a bit more streamlined than a largemouth's and is often used as a tool for rooting crawfish from rocks.

Where Do You Find Them?

Distribution of smallmouth bass in America now expands beyond its original native waters, due primarily to their transportation via the railroads as they moved westward in the 1800's. In some cases they traveled in tender buckets crews used to dip water from native habitat streams. In others, cooks transported them to waters close to train construction sites in order to feed the crews. Inevitably the hardiest survived to claim a place in the new watersheds. 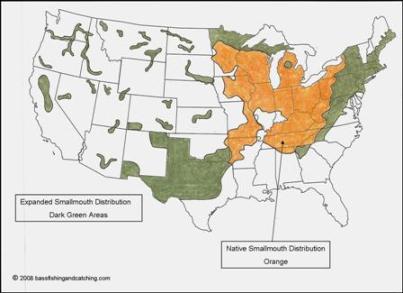 All but three states now have some degree of smallmouth population and the National Fresh Water Fishing Hall of Fame records that 45 of 47 states have recorded catches exceeding five pounds.

Where Do They Live?

Smallmouth habitat is traditionally considered to be clear, cool water around (65°-75°F) though this is not entirely correct. They tolerate different maximum high and low water temperatures in northern (67°-71°F) versus southern (78°-84°F)lakes.

Smallies are also considered inhabitants of moderately deep, rocky areas where crawfish reside. Though they do spend time in such areas and crawfish are a favorite food of theirs, they are more than willing to inhabit other areas if there is sufficient food sources, few competitors and sufficient habitat. Smallies are not usually the dominant species in a given body of water so they must often take what is left after the shallow, warmer water with cover in the form of weeds and brush are taken by largemouth and walleye.

Spawning habits of smallmouth bass turn on water temperature. The males begin creating nests when the water stabilizes at 55°F. Females move to the nest within days. Actual spawning will take place at water temperatures of between 60° to 65°F. She will drop around 7000 eggs per pound of body weight as the male releases milt. He remains to guard the nest and fry, she takes off.

Water temperature also determines the speed at which the eggs hatch.

What do smallmouth bass eat? They are opportunistic feeders with a varied diet. Smallmouth preference for certain prey in different lakes, rivers and streams differs and this preference even changes with the seasons in the same body of water. Their affinity for crawfish never seems to wain however and where they are abundant may make up the lion's share of the bronzeback diet.

They do eat many other aquatic creatures and insects however and only their availability determines the frequency in which smallmouth dine on them.

Many anglers have no knowledge of the homing nature of smallmouth bass. It is one of the strongest of all freshwater fish and as anglers an understanding of this smallmouth tendency will contribute greatly to our ability to find them. However, as with all things concerning smallmouth bass, there are situational and circumstantial exceptions affecting the homing tendency.

Want to Catch Them? Learn Their Habits

Catching smallmouth bass with lures or live bait is dictated by the presentations and techniques you use "after you find them". You will know where to find them if you understand their habitat, know their spawning and eating behavior and appreciate their homing tendencies.

Return to Bass Fishing and Catching from Smallmouth Bass