Black Bass Anatomy Is That Of A Top Predator

The fish anatomy of largemouth and smallmouth bass is the physical structure of a top freshwater predator. Strong, fast and equipped with all tools necessary to capture its prey. 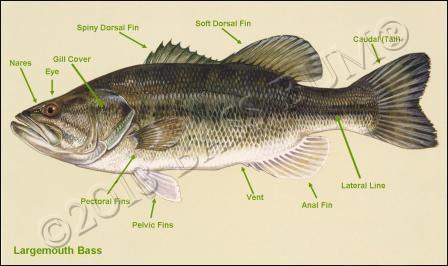 Gills are used for breathing, not the nose (nares). As water passes through the mouth and then over the gills, which are highly vascularized and thus very red in appearance, oxygen is extracted before being expelled out the rear gill area along with carbon dioxide. The gills are covered with gill plates which function to "pump" water across the gills as well as protect them.

Mouth, very large on the largemouth enabling it to eat prey of significant size by simply opening up and sucking it in. The mouth of the smalmouth is smaller, though not small, and is more narrow and pointed enabling it to feed downward on crayfish in rock crevices.

Eyes provide the most important of bass senses, eyesight. Bass are primarily sight feeders and use their other senses as "support" for the sense of sight.

Lateral Line is a supporting structure for hearing in that it allows bass to hear by feeling changes in water currents generated from movement in the water. This line runs the length of a bass, head to tail.

Scales serve a very important function of external protection, sort of like armor. Interestingly, ctenoid scales like those found on black bass, have growth rings from which a bass' age may be determined.

Slime, though not a structure of the fish anatomy, serves to protect the fish from parasites, disease and infection. This makes it very important to a largemouth bass, smallmouth bass too, survival. Anglers should be aware that removing slime from bass through careless handling can do harm to the fish. 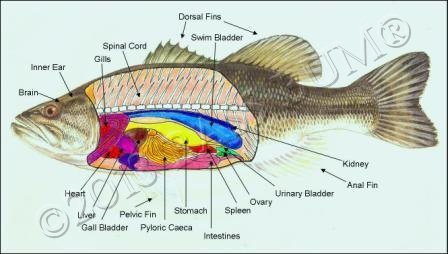 Spine, the framework of the fish that everything else is clumped around so to speak. It also houses and protects the spinal cord. For those of you who eat some of the bass you catch, it's the thing that, despite filleting them, always leaves behind a few spines that wind up sticking you in the throat. Maybe you ought to consider "catch and release", at least where bass are concerned.

Brain,the central control center where environmental analysis (within the limits of instinct programming) and automatic functions (like breathing) take place. They may not be Einstein but they're not stupid either.

Swim Bladder, a gas filled organ used primarily to maintain neutral buoyancy. This is what smallmouth bass are using when they're "suspending" in deep water and are so darned difficult to catch! It's also used to supplement the hearing of bass.

Stomach, in fish anatomy this has the same function as ours. It breaks down food and absorbs nutrients.

Kidney, does what ours does. It filters out liquid wastes in the blood and channels them out of the body.

Liver, this is an important organ of fish anatomy with multiple functions. Primarily it breaks down fats with enzymes and stores fats and carbohydrates. It also helps in maintaining blood chemistry and removing nitrogen from the body.

Vent, this is the site of waste elimination, enough said on that.

Pyloric Caeca is an organ that resembles thin fingers emanating from the stomach and intestine junction. Its purpose is not entirely understood but it is likely to aid in digestion.