Good Enough to See Prey, Lures, Lines, Bait and You!

Bass eyesight comes through eyes that are bulbous, somewhat oblong and without eyelids, what we might refer to as "goggle eyes". 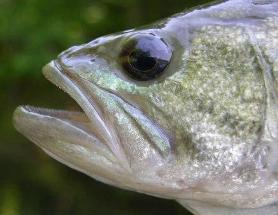 Arguably, bass eyesight is its most important sense as a bass feeds primarily by sight, especially in clear water.

It can see in all directions because their eyes are set slightly forward and on the sides of its head giving each eye virtually a 180-degree visual field arc of vision on each side of its body.

There are, however, blind spots. It can not see directly behind or below itself. Items in this "dead zone" will go unnoticed. Bass are weary of attack from the rear so often back into cover as a precautionary posture.

The lens of a bass' eye extends beyond the plane of the pupil giving the bass an exceptionally wide lateral field of view. Vision to its sides is monocular (sees with one eye) and farsighted providing at most a viewing distance no more than 50 feet in clear water.

The visual acuity laterally of a bass' eyesight, the ability to distinguish fine details in images, is quite sharp, though depth perception is inferior to that in its frontal vision. The peripheral ability inherent in bass eyesight to focus on distant objects to its sides contributes to it being one of our top freshwater predators. 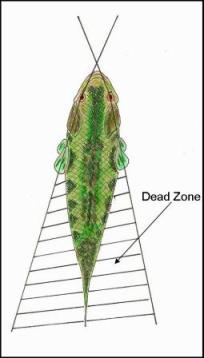 Bass have binocular (two-eyed, three dimensional) vision directly above and to the front of its head. This is where the two lateral fields of view overlap and where there is better depth perception. At rest it can focus forward at only roughly 5-12 inches. This binocular vision is what the bass uses to study its prey after locating it laterally then moving closer in a frontal assault before eating or attacking it. This decision is made in a matter of seconds!

Never doubt that they can see farther, 30 to 40 feet, by changing position or focus. They are also quite capable of seeing the angler above the waters surface. Have you ever had a bass grab a bait or lure you cast just as it hit the water? It saw it coming!

Maintain a low profile, muted colored clothing and stealth when approaching an area where you expect to find bass. You can easily spook them.

A bass is a visual hunter. Bass eyesight, its vision, is motion based. Motion is an indication of life which could be food. Objects that do not move are ignored as they see them as non-living things. Motion, as with most all predators, grabs its attention and is interpreted by its brain as food.

When motion is detected a bass can determine "all at the same time", the location, size, color, shape, size, flash and action of the object and do so at a substantial distance.

Size. As for size, a feeding bass, especially with age, experience and learned behavior, will be quite selective. They will seek to get the biggest reward for the least exertion of energy but experience will deter them from prey, real or artificial, that poses a threat of injury or which may be beyond its ability to handle in a struggle.

Shape. What about shape? Bass eyesight is wired to see specific shapes as food, specifically objects that are long and slender like prey fish. They evaluate shapes relative to how they fit this instinctual wiring. That may explain why they so readily attack plastic worms, though worms are not aquatic creatures and a bass might never see one in its natural habitat.

Color plays a much smaller part in catching bass than most of us think. That's not to say bass can't see colors or that they don't, on any given day, have preferences. They see best medium green and red shades and to a much lesser extent blue and purple. When these colors fall in the darker end of their shades a bass sees merely a dark object.

Color fades to dark as the available light diminishes in deeper water so play little part in catching bass. The preceding link takes you to a good explanation of color and water depth. But color in topwater or shallow water lures, where there is a greater amount of light, is more important when fished in daylight.

Action relates to motion detection. Bass don't react to stationary objects as possible food. They are able to track rapidly moving objects without blurring. They tend to be excited by erratic movement rather than sustained motion as well as variations in speed. Starting and stopping, especially starts, draw strikes.

Learn How Bass Eyesight And Bass Hearing Are Used By Bass To Feed And Avoid Danger And Your Lures!