What About Fluorocarbon Fishing Line?

Why Is Fishing Line Color Important? Or Is it?

What color is the best fishing line color? This question creates much angst among bass anglers. Some feel it has little impact on catching bass, others think using the right color it's critical. Several studies have clearly established that bass do see colors. I choose to accept these findings, not being a scientist. Who am I to challenge them? This being so, fishing line color is arguably important in a couple of ways. 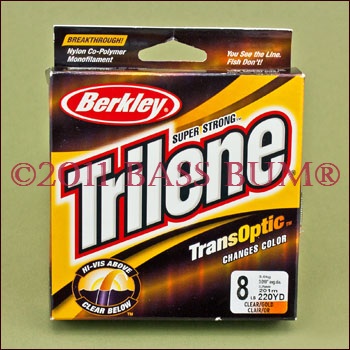 First, it enables the angler to see his or her line move and be put on notice that a bass has taken their bait/lure, despite having not felt a subtle pick-up or strong strike. If the angler is a line watcher, like those of us considered as "seniors", it can help increase hookset ratio. 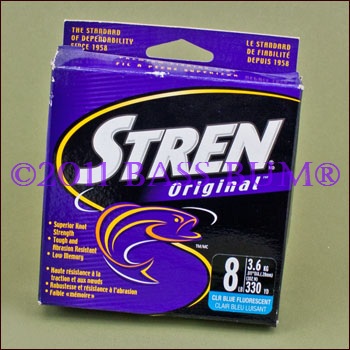 Secondly, some argue line detection deters a bass from striking a lure because it realizes it's attached to a line... to which an angler is attached? I mean, really? It strains me to accept the idea a bass is possessed of such logic and reasoning.

But controlled laboratory tests have shown that bass can identify and differentiate line colors. Tests have demonstrated that by striking certain colored fishing line they can get a reward while some colors offer a negative response. In time they avoid the colored line that brought them discomfort. What does this prove? That they can differentiate between colors, not that they equate a line attached to a lure as a dangerous.

Nevertheless, if we presume line detection can trigger strike aversion, it must be noted that this turns not so much on the actual color of the line, as it appears to us above water, or lure for that matter, but on how much it contrasts with the background be it stone, grass or the water's surface.

Contrast to background is what makes line visible to bass, not the actual color. For example, red fishing line and lures appear black as they sink into deeper water. In fact, red is one of the first colors to fade away. So it isn't the color red as it appears above water. It's how much it contrasts against the background environment or water surface.

Furthermore,the degree of contrast depends on several factors other than and in addition to a fishing line's actual color such as water clarity, bottom type, time of day, clear or overcast skies or even season. Because of this an in depth discussion about the intricacies of bass vision and the many affects environmental influences have on it is discussed elsewhere.

For this discussion we'll focus on whether or not there is a best fishing line color for minimal visibility.

Because, as with everything else in bass fishing, there are no absolutes. There is a ton of "he said", "she said", "they said", "we said" and "that's what I heard" when talking about catching bass.

OK, So We Accept That Bass See Color, No Doubt About It

So, we'll accept this established premise and not go fan casting into the scientific concepts of visible spectrum, light scattering and absorption, wavelengths of light or the rod and cone cells of the retina of a bass' eyes. We'll limit this discussion to the basic truth that the amount of light present determines the shade and intensity of any color, in or out of water.

What matters to we bass anglers is simply this. Studies have established that bass color vision is strongest in medium to light reds, red-orange and yellow-greens. As for blues and purples it's quite weak.

When fishing, remember, the deeper the water or less clear the water, the less light and color there will be.

When light hits objects, some of the wavelengths are absorbed and some are reflected (scattered), depending on the materials in the object. The reflected wavelengths, colors if you will, are what we receive through our eyes and process by our brain. No two people, or other creatures including fish, see colors the same way because of the different make up of the brains.

There are seven "wavelength" groups of color. They are those shown in the color chart Mr. SmallJaw is looking at above and correspond to those found in nature's rainbow. Each one, red, orange, yellow, green, blue, indigo and violet, has a different wavelength (some short some long) which determines the rapidity with which they fade or transform as light diminishes and particulate in the medium through which the light is passing increases.

For We Bass Fishermen It's Really Quite Simple

Now there are those who will lay out in intricate detail how one determines the light at specific depths by using a Seechi disk and a mathematical computation. From this you determine the best fishing line color that is the most or least visible at any depth. While this does indeed work, it's time consuming and cumbersome. I'd rather spend that time casting.

Simply put, all we bass anglers need to know is..... lots of light, lots of color; little light, little color.

For example, the chart below reflects, very generally, the rate colors transform from bright to gray or black as water deepens and available light diminishes. Note which colors fade out the quickest when water is "clear", "stained" or "muddy", and use it as your rule of thumb yardstick, for determining the best fishing line color, or worst for that matter, to use. 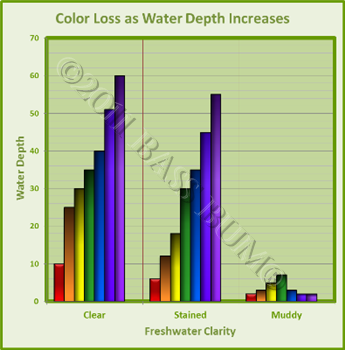 So what does the chart tell you? In optimum clear water conditions, which those of us who fish lakes and rivers rarely see, the color red, as we see it out of water, is practically gone at 10' and has assumed a color of grey or black.

Orange and yellow are quick to follow fading out completely at 25' to 35'. Green hangs in a bit deeper with the family of blues continuing to show in water 60' and deeper. In stained water the effect on all colors fading is worse.

Interestingly, notice that in muddy water the blue family of colors is the first to go.

But, under normal, ever changing conditions including such things as water clarity, time of day, season, angle of light hitting the water and amount of particulate in water impacts the amount of light penetrating the water. This in turn affects the degree to which colors will fade as water deepens. So, what might be the best fishing line color one day or in one circumstance may not be the next day or on a different body of water.

A line doesn't disappear when its color fades. It becomes brown, black or a shade of grey. In the final analysis the best fishing line color, if reduced visibility is your goal, is that which contrasts the least with the background. In other words, the best fishing line color is the one that, given the conditions at hand, blends with the background.

The chart below "is not exact" in its representation of color change in water. There are far to many different influences on any given day that affect this. It is merely a general representation to give you a general idea of how line color transitions as it goes deeper in clear water. The change in muddy or stained water occurs even more rapidly. Hopefully it will help you appreciate the fact that line underwater is seen differently underwater and help you win picking the best fishing line color for the circumstances in which you're fishing. 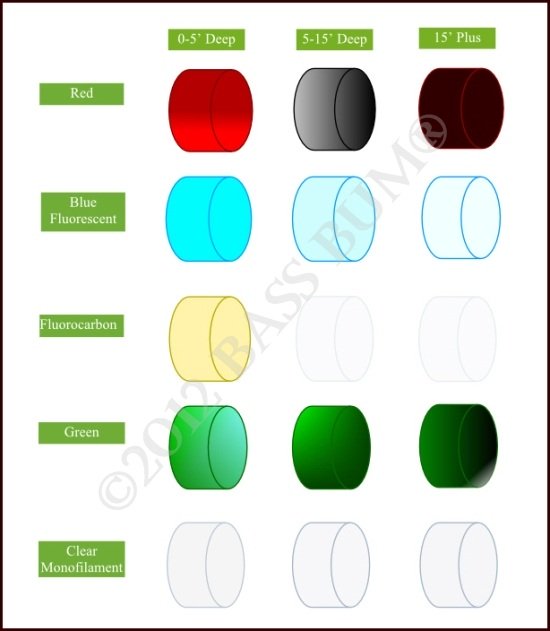 The theory here is that the irregular color changes along the line breaks up any contrast it might have with the background. In so doing, it will disrupt any ability of bass to see the line. Secondly, it's professed by manufacturers that the camo pattern prevents light from traveling down the line making it less visible.

It's true that red is the color to most quickly transition to gray or black, doing so within the first 10' to 15'. It doesn't become invisible. In fact, in the act of becoming black it may in fact be more visible depending upon the color of the background environment. Remember, contrast is not what we want. We want our line to blend into the background unseen. So the the dominant color of the background or particulate matter in the water will determine if red line is visible or invisible to bass.

A red (black) line against a green background of vegetation or the green tint of stained water is going to contrast, not blend. However, if fishing around red mud banks, like what you might find in southern impoundments, red line will blend quite well because bass are sensitive to red-orange color. The bank, the mud particulate that gives the water a red hue and the line are a similar shade underwater and blend together relative to a bass' color vision. In the first instance red line is not the best fishing line color but might very well be in the second. Simple uh?

Red line is not the best fishing line color for shallow water situations, meaning three feet or less. It's going to show as red unless the water is tannic or stained with mud particulate.

This color is great for line watchers and since blue falls into the color spectrum to which bass are the least sensitive it likely appears as simply gray to bass even if it retains its blue hue underwater.

Most often, depending on light intensity, this line fades to a light gray under water though some anglers report that light can travel down the line making it quite visible underwater. That would appear to depend on such things as the time of day, directness of light and whether it's cloudy or a bluebird sky.

Despite the common belief it "disappears" under water, it really appears whitish and still slightly visible. Why, because though it has the closest refractory index to that of water than any other material from which fishing line is made. Water being 1.33 and fluorocarbon 1.42. That's close but not the same.

However, tests by Berkley and other companies have deduced that while not "invisible" it is certainly less visible to bass, especially when less than 10lb test.

Though it would seem that fluorocarbon line is the best fishing line color if your goal is for bass not to see your line, it may not be the best for all fishing circumstances.