In its most basic form a Texas rig consists of a sliding sinker, preferably bullet shaped, and a straight shank hook upon which a worm is threaded with the hook point buried in the body of the worm to make it "weedless". The worm must be straight on the hook, otherwise, the angler gets terrible line twist, absent a swivel, and the lure's action will appear unnatural.

This rig has a significant advantage over most other rigs in that it can be fished across almost any bottom type and worked relatively snag free through stumps, rocks and brush. It's safe to say that most anglers consider this the "Go To" rig when fishing heavy cover.

Joining the Worm and Hook 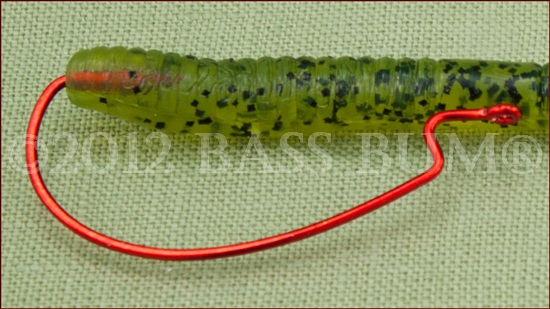 Insert the hook point into the head of the worm pushing in up to the bend before directing the point out the worm's side. 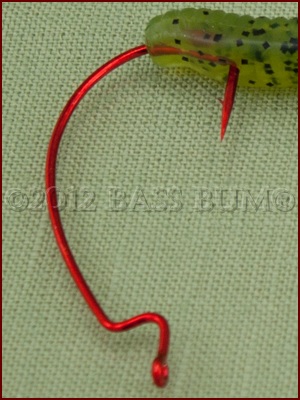 Push the hook point out the side of the worm 1/4 to 1/2 inch down its length.

With just the hook eye still protruding from the worm's head, twist the hook a half turn until its point is toward the worm body. 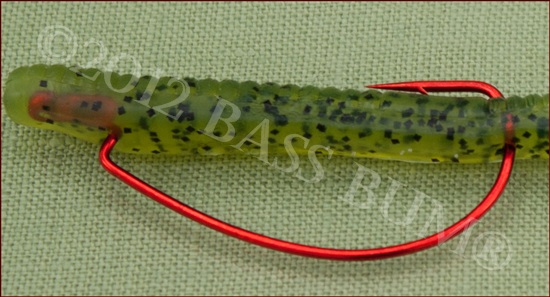 After pushing the hook point into and through the worm make sure the hook is centered and that the lure hangs "straight". Otherwise you will get line twist. Be sure and pull the worm over the hook's eye after tying on to your line.

This picture shows the hook point exposed. Skin hooking as discussed below is better to protect against hang ups.

Though there is no hard and fast rule for hook selection, hook size is correctly determined by the "length" of the soft plastic lure being fished. But what about the thickness, weight and buoyancy of the lure? Do these factor in? What about line weight and type? When should the hook be heavy or light wire in a Texas Rig?

Which hook style is better for a Texas Rig, straight shank, offset shank or EWG? Many, me included, feel that you can get better hook sets with a straight shank hook when fishing plastic worms. However, if the lure is bulky like a tube, some craws or any of a myriad of creature baits which tend to be thicker, wider and heavier than a worm. Then a wide gap hook with and offset shank is better. Another good choice could also be a round bend offset straight shank hook depending on the shape of the lure.

As you spend time on the water you'll determine which is best for your personal fishing style, techniques and favorite lures.

When fishing heavy cover with a Texas Rig it's best that you "skin-hook" the hook's tip, that is, push the point completely through the lure then bury it just under the surface of the lure's skin. This will greatly contribute to making it "snag-less" whereas leaving the hook point exposed as shown below right will lead to frustrating "hang-ups". 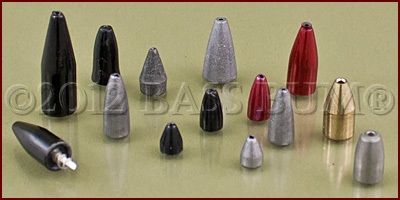 One of the most common mistakes anglers make is using to much weight with the Texas Rig. The sinker should be as light as possible while still getting the lure down and and once down enables you to "feel" the cover and structure you're fishing. The lighter the weight the more natural the lures action.

Which is better,a sliding or fixed sinker?

When a sinker slides up and down the line, as it moves over a log or limb, it can sometimes cause the lure to "hang up" on the cover as it follows the sinker over. When lure and sinker are separate, the sinker can get wrapped around a limb, twig or branch.

Line should be at least 12-14lbs and abrasion resistant monofilament. Trilene XT, which is very abrasion resistant, is good for Texas Rigs. It is larger in diameter than many other lines and can cause manageability problems on a spinning reel however. To enhance the ability of my old eyes to see line movement after a light pick up I sometimes use Stren fluorescent line, though it too is of a larger diameter.

A line I've adopted as my primary line after two years of unbelievable success with it is Trilene "Sensation". It's a small diameter line so strong that it's almost impossible for me to break when I get hung up. It has good knot strength and is very manageable with spinning gear. I use it in many of my presentations for both live and artificial bait.

Some choose to use superlines as heavy as 17-30lbs when flipping or pitching a Texas Rig as they are not concerned about the visibility of these lines in heavy cover. Additionally, the superlines won't result in as many break-offs as with mono in heavy cover. Some are quite visible in clear, open water however.

Your rod should be one with significant backbone so you can generate a powerful hook set. You have to be able to drive the hook not only through the plastic lure, which may be bunched up into a glob by the bass' strike, but also through the very tough jaw of the bass.

A good graphite rod 7´ to 7 1/2´ in length that is medium heavy, fast action should suffice for most Texas Rig applications.

If you're pitching or flipping into very heavy cover then you might want to use a heavy "flippin stick". For example, I use an All Star TAS 908BB "flippin stick" that is 7´ 6" long with heavy power and fast action for this. I combine it with a Shimano Castaic CA-201SF casting reel.