Swimbait lures come in sizes large and small, jointed and non-jointed, soft and hard, and are sometimes incredibly realistic in design and action. They all have one thing in common, the potential to catch big bass!

There Are Four Primary Categories Of Swimbaits 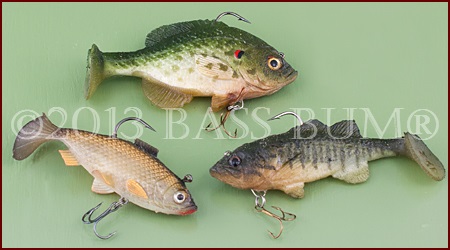 Rigged With Internal Weights and Hook

Soft, solid bodies, like the ones shown above, are swimbait lures created from soft plastic with "solid" rather than hollow bodies. They have "internal" lead weights and one or more top hooks and possibly a belly treble hook. Some just have additional belly rings which accommodate the addition of a stinger treble hook. 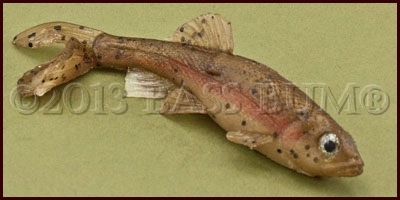 Must Be Rigged With Swimbait Hook

Other solid soft body swimbaits, like the Little Creeper Trash Fish above, do not come rigged with a weight or hook.

Soft body swimbait lures are very effective when allowed to fall deep and then retrieved slowly just above bottom and along structure. They allow the angler to reach depths (20-30') unattainable with traditional lipped crankbaits. They also produce well when retrieved just above vegetation or along its edges.

I use soft body swimbaits like the 6" Castaic Rainbow Trout, Matt Lure's bluegill and baby bass and YUM's "Fat Money Minnow", all of which are 6" or shorter and weigh between 1-2oz.

If I fish the smaller swimbait lures like the Strike King "WlidEye" Swim Shads shown in the two photos above I use my standard jig and worm tackle. These are usually less than an ounce in weight even if up to 6" in length.

However, if you're using the "big boys", lures that are 8-12" and weigh 6oz or more, then a swimbait rod appropriately rated should be used like the 7'11", heavy or extra-heavy, Shimano Crucial Swimbait Cast Rod.

These have been around since 2006 and their use and acceptance have grown steadily with bass fishermen since. They are generally thin in shape, have paddle tails and hollow or split bodies. Though not as realistic in appearance as "solid soft body" swimbaits, these design traits impart very realistic action when retrieved. Additionally, the hollow design allows for collapse when taken by a bass and facilitates a good hook-set.

Weighted offset hooks are called for with these swimbait lures as the weight serves as a keel to make the lure run true. There is a small problem with these hooks if they don't have some type of screw-in keeper. If you push the hook through the nose as you would when Texas rigging a worm you will likely tear the head when pushing through the weight. When fishing open water a treble trailer hook can be added.

Though available in lengths 3 1/2" to 8" the 4" and 5" versions are the most popular with every day bass fishermen and the 6" for tournament anglers. 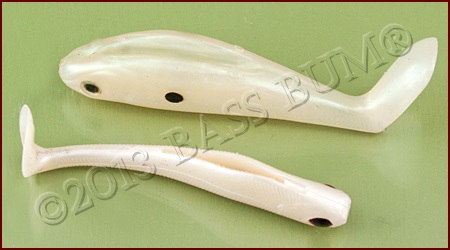 YUM's "Fat Money Minnow" comes packaged with hooks and "spike" weights that can be inserted in the bait in pre-cut slots. This bait also has a pre-cut "hook slot" facilitating easy hook placement. Other companies make hollow bodies that come without a pre-cut hook slot and must be modified by the angler to create one. However, some do, like the Berkley Swimbait above.

Because hollow body swimbaits are much lighter than other swimbaits they can be fished on standard tackle.

Many, including myself, use 7' to 8' medium-heavy rods for fishing these baits. Because swimbaits are most effective in clear water the longer rod is a good idea in order to achieve long casts.

I fish these on both spinning and baitcasting gear rigged with 12-14lb mono or fluorocarbon line. Purists will stick with baitcasting. I feel you should use what you're most comfortable with. 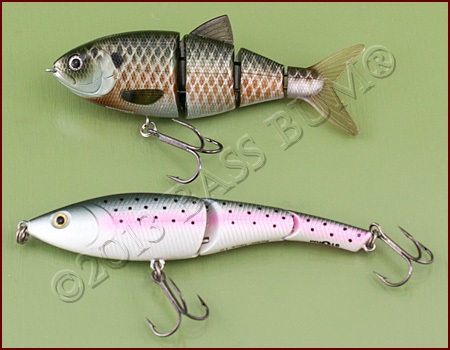 Hard body swimbaits usually have two treble hooks rather than the single treble of solid soft body or the single top hook of hollow body swimbaits. This is a significant advantage for increasing hookups, especially in open water.

Some will argue that the hard baits don't have the same appeal as soft baits. My personal experience doesn't support or negate this argument as I've caught bass on both. I tend to fish hard body swimbaits 3-5' deep over flats, long points and submerged timber.

The gear you normally use for crankbaits works for these "smaller" hard body swimbaits. A 7' to 7 1/2' cranking rod and a high speed reel spooled with 12-17lb mono or fluorocarbon line should serve you well.

If you're fishing the magnum 9" to 12" hard swimbaits made of wood or plastic it's a whole different story. These are very heavy and often bulky. For these you need 7' to 8' heavy or extra-heavy "swimbait" rods. There are numerous manufacturers of such specialty rods. Go for a 300 or 400 size round baitcasting reel to effectively fish these large lures. Spool them with 25-30lb, monofilament or fluorocarbon line. 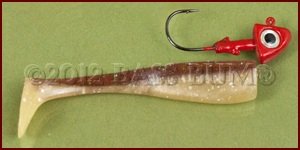 These swimbait lures, of which the one above is an example, combine a tail with a leadhead sporting a single jig style hook. They are most often found in the range of 4" to 6" lengths. They are fished as you would a bottom bouncing jig or a swim jig.