The two primary crankbait shapes are the minnow body and the shad shaped body. The first is long and thin like the "common minnow", the second what might be called stubby in comparison, resembles shad. Both imitate baitfish preyed upon by bass. 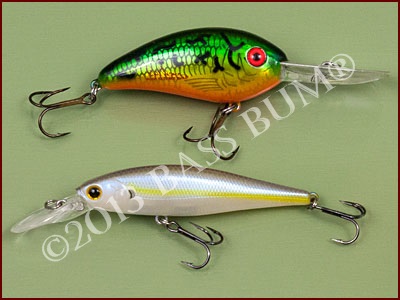 It has been clearly established through research that given a choice, bass, especially smallmouth bass, prefer a slimmer bodied minnow rather than those that are shad-shaped. Thinner minnows are easier to swallow and much less likely to lodge in a bass' throat.

This is true I'm sure, but we all know a bass will knock the snot out of a shiner or shad given a chance.

There are three styles of bass minnow lures. There are (1) surface or shallow running, (2) suspending and (3) sinking versions. The surface and suspending versions are by far the most used by bass fishermen today.

The most well known of the floating minnow baits, if not the very first, is probably the Rapala "Original Floating Minnow", made from balsa wood. This is a decades old minnow bait lure that imitates a minnow "lolly-gagging" around on the surface. Many companies offer floating minnows today. There are versions from Bomber Lures, the Long A; Cotton Cordell, the Redfins; Smihtwick's Rogue; Owner's C'ultiva and some from Yo Zuri and Lucky Craft as well.

Bass crankbaits that are floaters are not deep divers but rather, when retrieved, run shallow. Their designed to be fished "on top" with subtle movements, twitches if you will, or retrieved just below the surface with a stop-and-go action. These lures will rise to the surface when you stop your retrieve.

Floaters are good for retrieving up to the edges of submerged cover like brush and grass, then stopped and allowed to float above it where you then slowly twitch the lure over the cover.

Again, it's Rapala Lures that defined this category with the Rapala Husky Jerk. The Husky Jerk and other lures like it, such as the Strike King Wild Shiner shown above, are designed to be reeled down to a pre-set depth (usually found on the box) where they will stay suspended when you pause your retrieve. 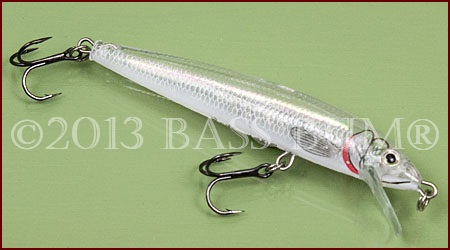 Now think about this. A lure, which closely imitates a minnow baitfish, that actually stays "smack in their face". They don't sink like a rock nor do they float upward like a balloon. Minnows, real ones, are not in the habit of sinking down or floating up. They tend to either move horizontally or at an angle. Or, they suspend with slight movement of their fins and tail. It's only logical a lure should do the same.

It seems that a suspended lure also has a special appeal which draws bass up from many feet below the lure to attack what must appear to them to be an easy meal.

Rapala Lures leads again with its Rapala Countdown Minnow. This lure is designed to sink at a rate of about one foot per second. These bass crankbaits will serve you well if you're targeting a piece of cover at a known depth. Say it's a brush pile or submerged tree tops 5-6' down, cast to the target and count down the seconds till it's just above the cover. Start your retrieve.

Frankly, I rarely use these type minnow bait lures anymore. Most bass anglers I know don't either. Now, sure as I've said that there are probably new lures out from Japan or here in the states that are designed to do just this, sink. If you know of any I'd appreciate your contacting me (Contact Us) about them. I'll share them with our readers.

If you have floaters and suspenders in your box I feel you're pretty much covered though. But I'm always willing to learn something new when it comes to bass fishing.

Does Minnow Lure Size Matter Between Largemouth and Smallmouth? 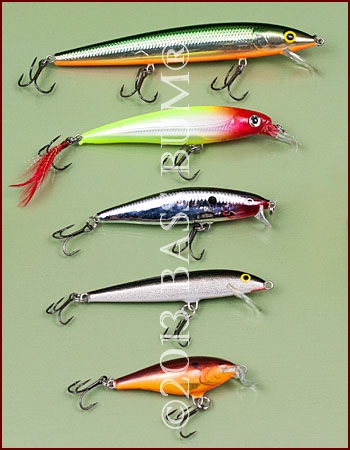 I've heard for years that when targeting smallmouth bass an angler should use smaller crankbait lures than for largemouth. "They have smaller mouths you see, and being so dainty they won't attack a big lure. Use 2', 3" or no bigger than 4" long lures", they say. Hogwash! I've caught smallmouth on each of the lures above, even larger lures than these.

Now I admit, there are many smarter than me and research might support this argument. But in my experience, the sheer aggressive nature of smallmouth bass has enabled me to regularly catch smallmouth on lures bigger than 3-4". So I wouldn't live and die by that smaller lure thing.

There is very little black and white in bass fishing. Bass will behave according to their needs, comfort level and attitude, all of which change daily. So, be a junk fisherman and adjust your technique regularly. Don't get hemmed in by what bass "are supposed to do".

Many minnow lures are made with BB's enclosed within the body to give them sound. Is this something which will stimulate bass to strike? Or does it merely alert them to the lure's presence allowing them to find it? You can read more about bass earing by clicking here. But it is fundamental that bass are first and foremost "sight feeders".

It can be said that sound does not necessarily hurt a bass' response but sound alone probably won't "make them strike" a lure. If you fish early morning topwater you know how peaceful a lake usually is. Most of us throw noisy buzzbaits and other topwater lures that rattle in the early mornings.

Next time your fishing topwater try a topwater minnow that does not make noise, other than the movement of the water when it splashes at the end of your cast and when you subtly move it across the water's surface. You run less chance of spooking bass with these, especially in clear water.

What About Tackle Selection?

To each his own as in every bass fishing situation. Find the gear that works best in your hands. But for me, I prefer spinning gear. A lot of minnow baits are light weight and I can get better distance with a spinning rod and reel.

Rods - The best rod for minnow lures is a long "spinning rod" that is light or medium power, medium action. Like any crankbait rod, it should start to bend half way down the shaft with just moderate pressure. In fact, I prefer rods for minnow lures that might be called "whippy" (I said whippy, not wimpy). Why? Because long limber rods serve the same purpose as they do for other crankbaits. They absorb some of the shock of a strong strike and allow that slight bit of extra time for the bass to hook itself without pulling loose.

Also, when playing the bass the flexible rod will again serve as shock absorber and help prevent the bass from throwing the treble hooks. Bass are notorious for doing this and it seems lures with three hooks, as many minnow lures have, are the easiest for them to throw. Longer rods help me make longer casts of what are often light weight lures as well.

Reels - As for reels, a spinning reel with a large capacity spool works well and enables long casts. A 5:1.1 gear ratio is a good choice, not too fast nor too slow.

Many anglers prefer baitcasting setups, particularly for their deep diving crankbaits and some for their minnow lures. The same applies to the rod, that is whippy, and the reel can be a high speed reel, 6:1.1 ratio. Some bass anglers always use fast crankbait reels and merely slow their crank speed to adjust for conditions.

Return to Crankbaits From Minnow Lures