There Are Many Different Baitfish But Their All Minners To Me!

When we talk live minnows we're really referring to "baitfish", which are any small fish upon which larger fish prey and eat. We all tend to just lump them together as "minnows. Since all larger fish prey upon and eat baitfish as a large part of their diet it's only natural that we should consider them as "minnow bait" with which to go after bass. In fact, live minnows are the number one live bait used by bass anglers.

Which Baitfish Are Best?

When it comes to baitfish what matters to a bass is what the minnow looks like, smells like and how it swims, the wiggle in its woggle. Don't all baitfish have these traits? Yes, but some are better as live minnow bait than others for various reasons.

Hardiness is a major consideration. You want your live minnows to be lively minnows under water! Some are far more durable than others. The following will give you an idea of what to expect.

These Two Get My Vote As Best

Though there are a multitude of different baitfish there are but a few that are considered best as live bait for largemouth and smallmouth bass. Shiners and creek chubs (creek minnows) top the list. 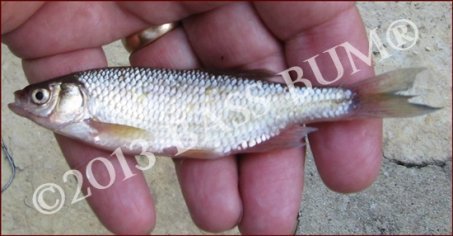 Shiners have great "flash" to attract bass. These are readily available at your local bait shop, at least in most of the country but the far west. They prefer cooler water and won't perform well in high summer. I've found the best size to be 3-3 1/2" in length.

The one shown top, above is a Whitetail Shiner. There are also "Common Shiners", Spottail Shiners", Emerald Shiners" and "Golden Shiners". The goldens are usually seen as the shiner used in the deep south, especially Florida.

Creek Chubs, picture above, and what the Bass Bums™ refer to as creek minnows, are in my opinion the very best baitfish you can use to catch largemouth and smallmouth bass.

Unfortunately, they are not readily available in bait shops. Though many years ago there were individuals that caught and sold creek minnows today this practice has faded away. So if you want them you must catch them yourself. Not an unpleasant activity I might add, however.The one above was one of many trapped by me in a small creek that runs through my lot.

So in order to insure you get healthy, lively specimens buying baitfish requires some attention to detail. Consider the following when buying your baitfish.

You Got Them, Now How Do You Keep Them Healthy?

What you want are "live bait minnows" with the emphasis on "live" or better said, "liveliness". It doesn't do you much good to buy baitfish that die quickly or are devoid of that all important "liveliness". Might as well burn those dollars!

What's most important after you've made sure you bought healthy, lively minnows? Keeping them that way! And to keep them that way means keeping them cool, uncrowded and oxygenated.

This type metal minnow bucket has been around a long time, probably because they work, at least when given proper attention. They are a pain in the backside as far as I'm concerned. They must be taken in and out of the boat when moving from one spot to another. You make noise when taking them out of the water to retrieve a minnow and when dropping it back in the water. They also clank against the side of the boat creating even more noise.

If you forget for any reason to return them to the water for any extended period, and we've all done that, you will most likely have fewer live minnows and more dead ones. Or at least you will have greatly weakened most of the minnows in your minnow bucket.

An ice cooler combined with a small recirculating pump (aerator) that will run off of a 12-volt battery also works well for transporting live minnows. A small, complete aeration system, not including a cooler, can be purchased for between $30.00 to $60.00 depending on features.

I've successfully used such a system many times in the past but the problem with such a system is its portability. A cooler sufficient for 10-12 dozen minnows is of necessity large and the aerator consists of several parts to keep up with, not to mention hauling around a heavy 12-volt battery. 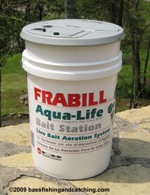 The "tower" at right is what I now use to transport and keep my minnows in after buying them. There are several other brands and styles on the market and I'm sure they all work equally well. I'm just sold on the concept. It incorporates an aerator in the container that provides constant oxygenation to the minnows.

This unit holds six gallons of water and runs on two D-cell batteries. I've used it for a week without changing batteries. I do pour out "old" water and replace it with fresh water every 2-3 hours. I also put in a pinch of a product called "Shad-Keeper" which helps eliminate ammonia and surface foam.

I put six dozen or two pounds of shiners in this unit with no concerns. I've even put four small pound and a half largemouth in it to transport for over three hours from one small lake to another without any problem for the bass. 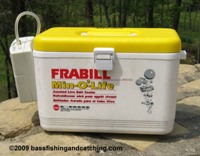 This smaller 8 quart "tub" also has an aeration system in it and, as with the larger model, there are several different brands of equal quality. It's great for holding three dozen minnows all day and it can be kept right at you feet. The aeration system keeps the water oxygenated and fresh. Put in fresh water every couple of hours and your minnows will stay fresh and lively.

I use the larger one as a holding tank for my live minnows and refill this smaller one from it. Both units require two D-Cell batteries which will last for at least 80 hours.

I'm telling you, these will make your life as a live bait fisherman using live minnows much easier!

Back To Fishing With Live Bait From Live Minnows