In general, ideal largemouth bass habitat is one with slow to non-flowing water, water temperature from 80° to 90°F, an abundance of aquatic vegetation, which provides a place for food and cover if necessary, and water that is clear.

They're found in rivers, lakes and ponds, though lakes provide preferred habitat. They gravitate to areas less than 20 feet deep. In colder areas they also need water deep enough to allow them to over winter. They seek areas filled with submergent vegetation, submerged logs and brush as well as rocks. These types of cover and structure are sought by largemouth bass from birth as they offer places to hide when young and places from which to ambush prey when mature.

Good largemouth bass habitat must also have a food chain that includes plant life within which plankton and small invertebrates like crawfish and insects live. These provide the foods for small fishes and other aquatics like frogs and waterdogs, upon which largemouth bass feed. 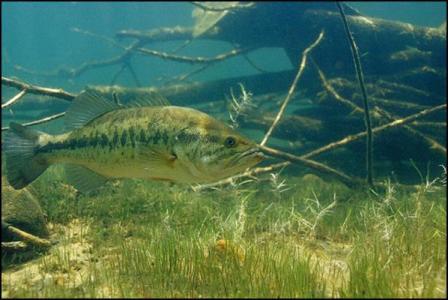 Northern strain largemouth bass will tolerate a wide range of temperatures. They function best in water between 65° and 90°F, but they are able to tolerate water that rises to the "low 90s" in the southern states. In the South summer water norms will range between 87° to 92°F which largemouth can tolerate, though "prolonged" exposure to temperatures exceeding 95°F can kill them. Florida strain bass are naturally conditioned to a higher average temperature and can at times and for short periods venture into 100°F water.

In colder areas in the northern states, where there are many natural lakes which may freeze over in winter, they can survive "near" freezing temperatures. However, they will seek out deeper areas and are there able to survive under ice for 5 to 6 months, so long as the oxygen level doesn't decline below 5 or 6 ppm.

Just because largemouth bass prefer a specific temperature range does "not" mean you will always find them there. They will inevitably go where they must to find food and the temperature won't keep them from doing so. Thus, largemouth will move from deeper, cooler water to shallow warmer water in pursuit of food, then back deep again. Larger bass engage in this behavior regularly while smaller bass tend to remain in shallow, warmer water to feed and avoid predators.

Dissolved oxygen (DO) is measured in parts per million (ppm) and is very important to bass, which require a higher DO ppm than most game fish. Fully saturated water measures about 10 ppm. Bass are stressed at a DO level of 5, especially in warm water. They do best in water near saturation levels of 8-9 ppm, especially in water temperatures between 70° and 80°F. This DO requirement is a primary reason largemouth are often found in water less than 20 feet deep.

Water collects oxygen from exposure to the air and as a byproduct of photosynthesis by aquatic plants. All lakes have sufficient oxygen levels in "shallow water" due to the water circulation caused by wind and the fact that shallow water is where the aquatic plants are. Moving water is continuously mixing with the air so almost never experiences low oxygen levels. Aquatic plants also contribute greatly to the dissolved oxygen of rivers.

In fertile lakes, where organic matter is abundant, oxygen is rapidly consumed, often faster than it can be replaced. Stratification occurs as plants and animals die and sink to the bottom where they decompose. This decomposition greatly reduces available oxygen forcing fish into more shallow areas.

However, the fertility of a lake determines the "load" in pounds of fish it can maintain. Generally speaking, the higher the fertility level, the greater the level of organic material that sustains the food chain and the larger the largemouth population. This general statement must always be revised in the context of each body of water and its classification.

Low fertility lakes (oligotrophic) have deep clear water with ample oxygen even in its deepest areas, are weedless, heavily rock bound and most often located in the colder region of the Canadian Shield. These lakes are not good largemouth bass waters though they make good smallmouth and great trout waters. 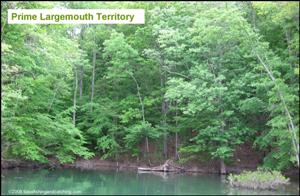 Largemouth bass are one of the most cover-oriented freshwater fishes. Throughout their lives cover will play numerous important roles in largemouth bass habitat.

From birth they associate it as a place to hide from predation. With age they adopt it as a place from which to ambush their prey or retreat from the sun.

Cover is anything that is in or on the natural lake, "structure" is the bottom. A variety of cover types contributes to good largemouth bass habitat. Cover includes lily pads, grass, logs, brush, docks, tires, sunken Christmas trees, flooded timber or buildings to name a few. 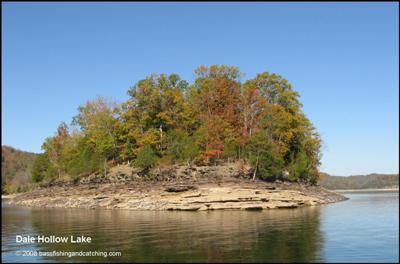 The geological shape of the bottom of a lake or river is its structure. This includes submerged islands, drop-offs, flats, the all important points and any change in depth, be it a foot or twenty feet. Bass relate to structure as reference points guiding daily activities and for defining their "home" territory. Structure, as does cover, contributes to the making of good largemouth bass habitat.

Understanding what constitutes good largemouth bass habitat and the relationship between "cover", "structure" and bass location is critical if you are to become a successful "structure" fisherman.