Do They Work or Just Make your Wife Mad?

You might be surprised to know that fish scents have been used since at least the 17th century. So their use has been the norm and not the exception through history. Think catfish and carp as targets.

In the recent past, at least since the 1980's, there has been and continues to be much scientific research into odors and attractants. Basically, if it smelled bad and could be pulverized and bottled it became a "fish attractant". Their application to largemouth and smallmouth bass fishing is relatively new.

Not surprisingly, there is a strong difference of opinion between scientist and fish scent manufacturers as to their effectiveness. New formulas are created each year by large companies and garage shops, understandable when one realizes fishermen spend tens of millions of dollars annually on scents. 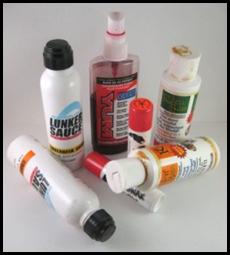 Whether you believe in them or not it is an absolute fact of nature that the bass sense of smell (for any fish really) plays an extremely important role in the life of a fish. Given this are we to be foolish and ignore it? Should we not try and figure out how we can use the bass' sense of smell to our advantage?

Hey, the picture to the right shows but a few of the products I use on a regular basis. I figure it can't hurt. I'll tell you why later. But first, let's take a closer look at the concept and reality of commercial aromas and their affect on bass.

Scent arousal and the bass' search for food.

When a bass detects a scent it will trigger either fear or repulsion resulting in flight, a search for food or a desire for sex. Not unlike most of us, uh?

Studies have shown a bass can be aroused to scents hundreds of yards away. This doesn't mean it will then take out after the scent like a bloodhound. Bass are very poor scent trackers, in part because any scent in water is rapidly dispersed away from the source leaving no distinct identifiable trail that can be tracked. Furthermore, a bass' sense of smell is non-directional due to the very close physical proximity of the nares on its head. Both receive a smell at the same time so detection of direction of a smell is virtually impossible.

Once aroused by a scent it starts to look around for its source and once found approaches the target, pausing just before striking to make a final assessment using several of its senses, sight, sound and smell. This takes but an instant. If all seems well it strikes, its sense of taste being the final determination to hold it or release it. It would seem that the sense of smell is more important to bass "at close range". If something "just doesn't smell right" as it makes its final approach it will most likely turn away before striking.

Is it reasonable to expect your use of an artificial scent will increase your strikes or the number of bass you hook and land?

Scent as an attractant? As for increasing your strikes it must be understood that the rapid dispersal of scents in water and the nature of bass "not to track a scent" means that there really is no such thing as a "bass attractant". So your use of a scent will probably have little to no effect on the number of strikes as a result of "attracting" a bass to your lure.

"Scent and lure retention?" The time a bass holds a lure can be maximized by scent, under the right circumstances. This comes to play only when the scent is one that adheres to the lure and is not dispersed rapidly by water.

Water soluble scents will be slung off a bait when cast and what's left will disperse rapidly when making contact with the water. These will require re-application on every cast. Their effectiveness is at best minimal.

Even with oil based fish scents the oil molecules, which are water resistant, will disperse in water. We've all seen them form the familiar oil slick which indicates the scent encased in oil is merely rising to the water's surface. However, they may disperse from the bait somewhat slower than water based scents as they may cling a bit longer to the bait. Note that the bait must be dry when an oil based scent is applied or it will merely shed off with the water when cast.

Unfortunately, studies show that oil based scents are fairly useless as simulators of a bass' sense of smell and thus are not "attractants" as often advertised. The oil encases the scent molecules making them unavailable to the chemo-reception (smell) of the bass.

Odor masking is the best function of bass scents 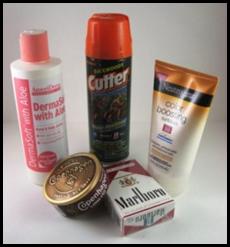 Just as bass are receptive to scents emitted from their prey when finally deciding to strike, they are also repulsed by offensive orders. It is well known that the "human scent" is one found disagreeable by bass. Additionally, they find the scent of tobacco, DEET, hand lotion, sun screen and soaps containing surfactants offensive. Don't think a bass does not smell these items on your baits after having them in your hands. Remember, a bass can detect 1/200 of a drop of a substance in 100 gallons of water.

Just as oil based scents prevent scent molecules from reaching the bass' chemo-receptors they also prevent the molecules of "offensive" odors from doing the same. Thus, they are likely to impact the bass' striking and retaining the bait in its mouth longer. You'll have more time to "set the hook".

What flavors and odors are best?

Any fish scent that simulates the chemical makeup of a bass' normal prey is best. I use only crawfish and shad flavored fish scents. All others, with he exception of garlic maybe, are probably of little benefit.

Taste is the final gatekeeper for the bass and is more in control of the actual consumption of food. The taste buds respond to many of the same substances as its smell receptors and can detect only those flavors that have molecules small enough to fit into its "receptor pockets". This eliminates any oil based fish scents as the molecules are to large.

These are chemical signals used by nature's creatures to communicate. They have nothing to do with "feeding"! So as attractants, forget about them.

Now having said that, it's interesting to note that pheromones are released by minnows when injured to warn of danger. Bass, and other fish predators, in turn are stimulated by this pheromone to feed. There are exceptions to every rule. Nevertheless, as a practical matter in commercial fish scents, pheromones have nothing to do with feeding.

Understanding A Bass' Sense Of Smell

Return to Fishing With Live Bait from Fish Scents