Anatomy of a Crankbait Rod

A very important rod design feature for fishing crankbaits is its taper. The taper of a bass fishing rod is the physical dimension of the rod blank as related to its diameter. It's the degree to which the diameter increases from narrow to thick running from its distal tip to its handle and butt. While taper is a physical design feature of a bass fishing rod, relating to form and shape of its required dimensions, its effect on the rod is to create rod action. Simply put, the taper determines the overall action of the rod and different actions are intended for different, specific fishing applications.

Action is a function of the rod's taper. It's a descriptive term that identifies at what point and the degree to which a rod bends under load and the time it takes to straighten once the load is removed.

The action of a rod, that is, its flexibility or stiffness, is directly related to the technique or application for which the rod is designed. And the action reflects how much of the rod's length bends while being cast, setting a hook, bumping a stump or snagging your fishing buddy. Buddy? Listen, we've all had it happen.

Anyway, extra fast action describes a rod where the majority of the bend occurs in the top 25% of the rod (75/25 action) and a fast action rod in the top 30 -35% (70/30 or 65/35 action). A fast action rod is one that "stops" bending toward the far end of the rod thereby bringing the stiffer, greater part of the rod shaft into play. This provides for a strong hookset when the angler is fishing single hook lures such as plastic worms, lizards and especially jigs.

Fast action rods are not as user friendly as are softer rods when it comes to making long casts because they don't "load up" as much energy to hurl a lure. Now, moderate action rods flex through the upper 50% (50/50 action) of the rod's length while a slow action rod will flex along its total length. So when the rod is under load there is less energy in the rod's limber shaft straining to straighten it.

Fast Taper Is Not What You Want In A Crankbait Rod

A rod with a thick diameter shaft at its butt and handle end that steadily and slowly narrows until the last 30%-35% of its length where it rapidly narrows to its tip, is classified as a fast-taper rod. The tip of a fast or extra-fast rod will be very sensitive because of it's light structure but as the bend reaches the stiffer section of the blank it will shut off quickly. At this point the strength of the total rod blank comes into play.

This is a good thing when it comes to setting a hook if you're fishing soft plastic baits like plastic worms or plastic lizards. It's especially good if you're fishing jigs. But it's not so good if you're chunking a crankbait. "Why is that?" you ask. "A strong hookset is a good thing, right?" you exclaim. To which I respond, "You're correct, but keeping a bass hooked is no less important than hooking one". And when it comes to crankbaits that's not always so easy. To reduce the probability of a bass coming unbuttoned from a crankbait a soft action, or at most a medium action rod, is called for.

It's Simple. The More The Rod Bends The Slower The Action

Slower The Taper - Softer The Action

While a fast-action rod has a soft tip that quickly bends, the tip also "shuts-off" quickly at the stiffer section of the rod. A medium or soft action rod has a much more gradual taper that spreads throughout a larger portion of the rod's shaft. If the rod is medium/moderate action the taper will run through the upper 50% of the shaft and in the case of a slow-action rod the taper is gradual over 75% or more of the rod shaft. 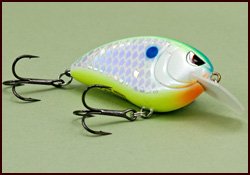 When crankbait fishing you must understand that treble hooks don't, in most instances, penetrate the tough mouth of a bass as securely as does a single hook. Treble hooks on crankaits are inherently thinner and smaller than single bass hooks. Though this means they readily penetrate the mouth of the bass it also means that the bass can often throw the hook during the fight if you don't maintain steady pressure. Additionally, the stiffness and lack of give that characterizes fast-action rods can literally pull the lure's hooks right through the mouth of the bass if the angler is over-exuberant in setting the hook.

So when fishing crankbaits you want to use any rod, spinning or baitcasting, that is crafted with a slow or moderate taper as this will produce a slow or medium action. The benefits? In no particular order there are many.

(1) A soft or medium action rod will do a better job of keeping a crankbait-hooked bass hooked!

(2) The softer action functions like a built in shock absorber enabling you to maintain a consistent and appropriate amount of tension when fighting a bass, should it make sudden surges toward cover or underneath the boat. Since the rod is "slower" to react to an abrupt movement of the bass the steadier pressure is less likely to cause the hook holes to tear larger.

(4) Slower action also creates an automatic delayed reaction in your response to feeling a fish. Just as it absorbs the shock of a bass surging this way or that it does so as well with your sudden jerk in response to "feeling" a bite.

(5) Speaking of "feeling". Most crankbait bites will feel like little more than an increased heaviness. This is the lure stopping suddenly and is another reason a soft action rod that "forgives" such a sudden "stop" is critical to fishing crankbaits successfully.

(6) When cranking through stumps and rocks a softer action rod is more forgiving and less likely to hang up your lure. This is due in part to the crankbait rod's softer action that is "easier" on the crankbait. It doesn't drive the crank into stumps like a stiffer fast action rod will. It's also due in part to your concentration and educated "feel" that tells you when your lure is hitting or about to hit some cover or structure.

With crankbaits casting distance is one of the most important considerations. A long rod, by design, has more blank which translates into greater energy for making longer casts. This is especially true with soft or moderate action rods that really load-up as they flex along so much of the shaft. A 7' rod can rocket a crankbait a long distance past your target placing it where during retrieve it can reach its optimum depth at the target.

I use several rods for fishing my crankbaits that are, while not specifically designated as crankbait rods, very effective for me. One is a Wright & McGill Skeet Reese Drop Shot/Slit Shot S-Glass rod. It's 7' 2" long and while rated moderate/fast has a fairly soft action. It's a spinning rod and I use it with my smaller crankbaits like Bandit 100's. It also provide a significant amount of cast control.

The rod I use most for crankbaits is a Shimano Compre (CPC-C70MB) baitcasting rod, 7' long, medium power, medium-fast action. It's rated for lures up to 3/4 ounce so covers many of the heavier crankbait lures I use.

So whatever rod you choose for crankbait fishing, spinning or baitcasting, if you stick with a rod, graphite or fiberglass, that has medium action and power enough to handle larger lures you should find crankbait fishing to your liking.