Save Money, Have Some Fun

Actually catching live bait, whether you're catching baitfish, catching crawfish, worms, lizards, insects or leeches, can be enjoyable and save you money. Take baitfish, specifically golden shiners, for example. Here in Tennessee a dozen shiners, the most popular freshwater baitfish, can cost 4-5 dollars a dozen or 12-15 dollars a pound. A pound is about 24-36 shiners, depending on size. You can run through six dozen in a day no problem! Do the math.

Furthermore, by catching live bait there is no better way to insure you have fresh, lively bait. A most important aspect of fishing with live bait. If your bait is not "lively" you're likely wasting your time.

Shiners, especially golden shiners, are the number one baitfish in America.

Shiners raised in a hatchery are not the same as those raised in the wild. Shiners that grow in the wild are far more lively than those raised in bait tanks. Additionally, they are more tuned in to their predator threats, i.e bass. As a result, they know what a bass is and that it wants to eat them. This translates into behavior that will tell you exactly what is happening under the water. If the shiner is swimming erratically and frantically left or right or is persistent in coming to the surface there are bass checking it out. If it is casually milling about move it. The shiner isn't close to bass.

Though hatchery raised shiners will also engage in this behavior it is to a much lesser degree than with environmentally tuned wild shiners.

Creek chubs, or what we in the South call creek minnows, are an outstanding baitfish that smallmouth and largemouth love! Unfortunately, while these were once readily available through bait shops or individuals dedicated to their capture for resale this is a practice that seems to have died away. So, creek minnows fall into the requirement of catching live bait and if you want them, you will most likely have to catch them yourself.

So how can you catch shiners and other baitfish? 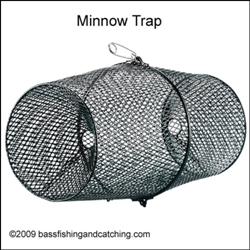 It should be pointed out that seine nets and cast nets can be used for catching live bait such as crawfish as well, though traps are better.

Catching crawfish need not be a painful experience.

Hand Harvesting- Live crawfish are a favorite food of both largemouth and smallmouth bass. Naturally, they make a great live bait. Of course you can wade most any stream or creek turning over rocks and attempt to grab them as they scurry off while trying to avoid what can be a painful pinch. This is catching live bait in hand-to-hand combat. Oh, and this is most effectively done at night when they're out hunting food. Usually hand harvesting crawfish requires a lot of time and energy for a minimal return on investment. 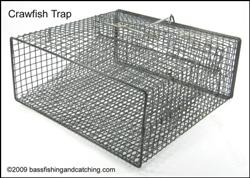 Traps- A far more efficient technique for catching live bait like crawfish is using a crawfish trap rather than by hand. Small trap devices can be purchased commercially quite inexpensively. Some resemble minnow traps while others are shaped like wire mesh boxes.

Good crawfish bait is a can of cat or dog food punched with numerous holes. Place the trap in a shallow, rocky area overnight. Come morning, retrieve your treasure.

If you're a do-it-yourselfer you can cut the top off a milk jug and place it in a hole so the top is level with the creek or stream bottom. Bait it and after the crawfish enter for the bait they will have a difficult time escaping.

If you are the creative type I'm sure you can come up with any number of ways to catch crawfish. Not being particularly creative and a bit lazy I opt for the commercial traps. 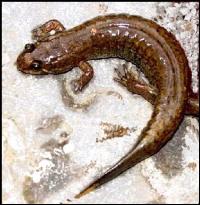 To catch lizards you better be fast on your feet.

Mole salamanders, spring lizards and giant salamanders are used as live bait for bass. Spring lizards fall in the same category as creek chubs as outstanding live bait. They're not easy to come by however, at least not where I fish, so they too fall into the catching live bait category.

Spring lizards are found along stream edges under rocks, logs and leaves. You'll find them easiest at night and a flashlight or headlamp helps of course. Wear some good sneakers because you're going to need to be fast on your feet. Turn a rock and be ready to grab. These little guys can really "scoot"!

Once you have these slippery fellows they don't require a lot of care as they are quite a hardy creature. Keep them a container with wet leaves, sticks and moss that you change regularly, if trying to keep them for any extended period. Feed them worms or minnows. It's best to use them right away rather than keeping them in a mini-zoo.

CAVEAT! Each state has its own regulations about catching live bait as well as selling or even using it. Here in Tennessee, of the 60 salamander species found, there is but one spring lizard which can be legally "collected, sold or purchased" and that is the "dusky salamander" (desmognathus fuscus). Be sure to check your own state regulations about restrictions on the collection and use of spring lizards or other salamanders.

With frogs you gotta get past the "cute" factor

Many live bait anglers consider live bullfrogs to be the number one "big bass" catcher. However, the leopard frog is the one most often used. They can be captured by hand or with a small net at night or during the day by walking along the marshy shore of a creek or stream. 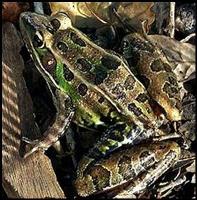 Leopard frogs can reach about 4" in length and have brown spots and distinct ridges running down their backs. These frogs are found throughout most of the United States and Canada in shallow permanent or semi-permanent water. 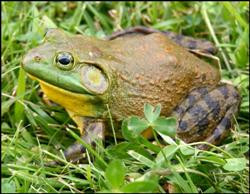 Bullfrogs, the largest of our North American frogs are green to brown in color, can reach up to 6" in length and are most abundant in the southeastern part of the country. These guys will eat anything they can fit in their mouths, sort of like a largemouth bass will. 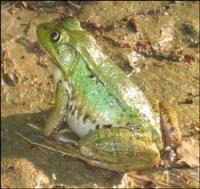 Green frogs are indigenous to the eastern part of the United States. They grow up to 3" in length and are, surprise, green in color.

Once caught, frogs should be kept in a "large" container as we all know they can jump quite high and far. Provide a small amount of water no deeper than half an inch as well as some structure upon which they can climb out of the water. Keeping them for an extended period of time can lead to their becoming diseased. It's best to use them as soon as you can after capture.

Don't turn up your nose to catching nightcrawlers and leeches, especially if you're going after smallmouth. They love them.

Earthworms are readily available in bait shops but when it comes to catching live bait worms are just about as easy to get from your own yard. They can be easily gathered after heavy rains when the soil becomes saturated. They must come to the surface to breath otherwise they drown. They also surface at night where they can be found and caught.

If you're a gardener and keep a compost pile you have a ready made worm colony. Just turn it and you'll find all you need. It makes catching live bait worms a cinch.

Keep them in a box filled with moist sphagnum moss or potting soil in a cool place. When I was a kid I used to put them in boxes filled with shredded wet newspaper. Works like a charm.

Keep worms out of the sun. It kills them quick!

Leeches are many but the "ribbon leech" is the one most often used for fishing. While readily available in bait shops in the northern states they are few and far between outside of these areas. Thus, trapping them is necessary elsewhere.

Used to be, when I thought of catching live bait like leeches, I really got the "willies". However, leeches are not "bloodsuckers" (a completely different creature). They feed on dead and decaying animal matter, not blood. They won't latch on to you and bleed you dry. So not to worry.

They can be easily captured in coffee cans or gunnysacks baited with some chicken etc and placed in shallow water where there is an abundance of minnows. As minnows die leeches feed on the carcasses. Merely crimp the top of the can and this will be sufficient to serve as a trap. The leeches will wiggle their way through the gunnysack fabric to the bait where they stay.

Once caught they can be kept for very long periods of time if kept in a cool place in styrofoam coolers or even minnow buckets.

Be sure and learn the regulations that govern catching live bait or selling and even using live bait in your state. They vary state to state. Also, be careful to not introduce any non-native or invasive species into any water body you fish whether in your home state or elsewhere.

Return to Fishing With Live Bait From Catching Live Bait