What Are Largemouth Bass Fishing Patterns?

Broadly speaking bass fishing patterns are, and this is my definition so others may vary:

"repetitious bass behaviors during a specific period of time, be it hours, a day or several days, throughout a specific body of water".

"Seasonal patterns", wherein bass tend to engage in certain instinctive behaviors at certain times of the year, triggered by changes in water temperature and number of daylight hours, are the broadest bass fishing patterns. These are the "major" movements bass make during a year.

The seasonal patterns of change, though not exact and varying from region to region, are good starting points for locating bass. Within them there are other patterns, patterns within patterns if you will. Identifying them and then applying the best lures and techniques to catch them is "pattern fishing".

In this article let's look first at the what natural forces influence the movements and locations of largemouth. These are the foundation of bass fishing patterns.

Where Do You Start? How About Temperature?

Remember, a bass is a bass no matter where it may live. It's wired by nature to behave according to the ever changing cues in its habitat that drive it to seek food, procreate or quite simply, survive. These cues usually turn on water temperature and length of day. Seasonal changes in water temperature and daylight hours do trigger predictable instinctual behaviors in bass. However, daily and weekly changes to daylight, current, water depth, wind, barometric pressure, inflow of fresh water from spring rains, water clarity, degree of dissolved oxygen and changes in bottom substrate within the seasonal trends makes identifying a "pattern" to fish difficult even for the pros.

Largemouth, Water Temperature and Survival
Further complicating the identification a "pattern" based solely on water temperature is the fact that largemouth bass can function quite well in water between just above freezing to a high of 98° with the "sweet spot" being between 65-85°. This presents a wide latitude for bass movement.
Nevertheless, the single most significant influence on the movement and behavior of bass is probably "water temperature". Why? Because a bass' body temperature is determined by the temperature of the water around it. It can control its body temperature only by moving to a different area of water where the temperature is more to its liking. Furthermore water temperature contributes greatly to initiation of spawning activity. So for the angler, water temperature is indeed important in identifying bass fishing patterns for bass but it must be taken into consideration within the context of the season, weather conditions, water clarity and even the length and time of day, all of which influence largemouth behavior/location.

The primary influence on largemouth bass movement is the coming and going of the four seasons, each of which comprise roughly three months. Of course these seasons beginnings, durations and ends are not the same everywhere. Winters are longer and usually harsher in the northern states while summer has a longer duration the farther south one goes.

Temperature Happens, When It Happens!
No exact dates can be pointed to as the day(s) when water temperature in any body of water will reach that magical degree that triggers the beginning and end of spawn. Temperature and length of daylight combined do so and predicting this "alignment" is next to impossible. Furthermore, not all bass move shallow or spawn simultaneously as different parts of a lake warm at different times regardless of daylight duration.
Florida may see largemouth finished spawning while in Tennessee they're in pre-spawn and in Wisconsin they're still hunkered down in their cold water haunts. Take a look at the map below. The three colored areas indicate general seasonal areas. Within each, the nature of a body of water, largemouth instincts, the impact of seasonal changes in daylight hours and the ever changing seasonal variations in weather on a body of water function to determine when and where largemouth can be found. Exactly when these changes occur in each region, be it Spring, spawn or Fall, will be different. However, the order in which these changes occur in each region will always be the same. The same applies to bass fishing patterns in the regions. 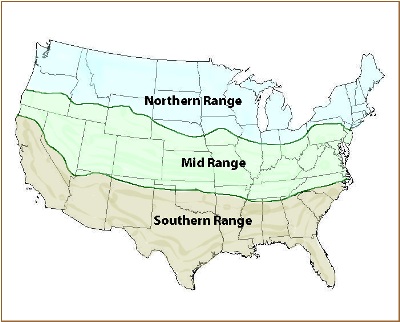 Spring movement centers around the urge to spawn and so will spring bass fishing patterns. Longer periods of daylight, from around 12 hours in March to 14 hours in May, triggers the instinct that pulls bass toward their spawning grounds.

Summer time is hot weather fishing time. The sun is high in the sky. Daylight in June and July is 15 hours long. With this combination comes heat and warmer water which nudges bass out of the shallows. Initially they will be scattered and suspended but eventually will school to chase baitfish.

Winter bass fishing finds cold air, cold water and fewer daylight hours, no more than 10. Largemouth seek the warmest, most stable water they can find. This usually means deep (again, remember depth is relative to the body of water you're fishing) where they become sluggish and feeding is intermittent with long periods between meals. Why? Because the metabolism of a largemouth bass slows markedly in winter and it may take a week or more to digest a good size meal.

There are two primary seasonal movements where bass move in mass and engage in the most recognized bass fishing patterns. One is the spring migration from deep water to shallow to satisfy natures call to reproduce. The other is from deep water in the late summer, early fall to shallow in order to feed. The latter happens because of the instinctive urge to "fill up" reserves needed to help survive the winter months.

An important aspect of these "seasonal movements" and the bass fishing patterns within them is the fact that largemouth make them by moving back and forth between shallow and deep water via "migratory routes", not greatly different than many wild game animals. These migratory moves will most always relate to routes along "edges" and rarely exceed more than a quarter mile distance.

Largemouth make other movements, less predictable and irregular, that center on finding food or more hospitable water in terms of temperature and dissolved oxygen. As bass fishing patterns these movements are short in duration as well as distance. They are temporary movements confined within their "home range" and they occur along defined paths, such as old roadbeds, tree lines or twisting, turning river channels. If you can identify the routes of these short feeding excursions and check them several times a day (during warm water periods) you can score big. Just keep in mind that they won't last longer than two hours, often less. In cold water periods they will be fewer in number and duration, 30 minutes or so.