Objects of Strength, Beauty and Frustration

Nature of The Beast

Baitcast fishing reels are also referred to as casting reels, bait casters, baitcasting reels and in the United States, though incorrectly, conventional reels. Baitcasters are indeed impressive mechanical tools, but are also, in my humble opinion, works of art.

Just look at them. Beautiful paint finishes and even chrome accents that rival the chrome accessories Harley aficionados put on their "hogs". Many of the low profile models look as if they're in motion though sitting still, like a Corvette or Maserati. Easy on the eyes for sure.

Today, baitcasting reels not only look good and rest easy in your hand, at least the low-profile versions do, but they hold promise of:

These are the traits in baitcasting reels that make a bass angler's head swim and his mouth drool. Nirvana! But there lingers always the fear of the dreaded backlash. Nightmare!

So what is it that gives baitcast fishing reels promise of such high performance and frustration?

Long Casts - The positioning of bait cast fishing reels places the bait cast reel's spool on its side with its axis perpendicular to the rod. This enables the line to be released from and retrieved to the reel in a direct line from lure to spool.

The line is not coming off the reel at a 90° angle as with a spinning reel so it encounters less friction. When cast, the baitcasting reel's spool is in "free spool" with the speed of its revolution controlled by the angler's "educated' thumb in conjunction with whatever brake systems the reel may have, centrifugal, magnetic or a combination of the two. Line races from the reel as it is pulled unimpeded or with minimal restriction from the spool by the forward energy of the rod tip and weight of the lure.

Casting bait cast fishing reels "overhand", rather than sidearm or underhand, is the casting technique that can produce the greatest distance though without the accuracy of side armed or underhand casts or pitching and flipping.

Cast Control and Accuracy - Why are anglers able to cast with more accuracy using bait cast fishing reels than with a spinning reel? Control. If an angler controls the direction and speed of his/her cast the end destination of the lure can be more easily determined.

There are a couple of reasons baitcast fishing reels lend themselves to exceptional control by the angler.

First, the requirement that a thumb remain in contact with the spool during the flight of the lure, in order to manage rotational speed, also gives an angler the ability to quickly stop its flight and drop it exactly where he or she wants it. This is done by simply applying thumb pressure at the right time. Point the rod to the target when casting and keep your eyes on the lure so you can stop the spool's rotation with your thumb before it hits the water.

Secondly, as referred to above, baitcasting reels today are equipped with brakes that contribute greatly to angler control. Proper adjustment of these brakes to the type rod, line size, weight of the lure and wind conditions can make or break a day on the water.

Power - It's a simple matter of physics. With baitcasting reels a spool shaft runs through the reel body. In contact with this shaft are positioned the handle, gears and spool. The handle, which turns the gears, is connected directly to the main drive and pinion gears via this shaft. In turn, the torque that is generated when the handle is turned creates energy that causes the spool to revolve. No detours. No right angles. A direct, linear connection. In short what you have is a "winch"!

So as you crank the handle of baitcast fishing reels the energy generated is transferred "directly" to the gears, then the spool. And why is this a big deal? Because it translates into cranking power.

Line Compatibility - Baitcast fishing reels work well with monofilament, fluorocarbon and braided lines. The same can not be said of spinning reels. If you want to experience a severe degree of frustration that will put you in a mood so foul as to want to kick your dog or slap your mama then load up your spinning reels with fluorocarbon and head to the lake.

By the way, line stiffness, or lack thereof I should say, will contribute to "greater casting distance" when used in a baitcasting reel. Smaller diameter line, such as braids/superlines, experience less friction when passing through rod guides, as such lines are limp and practically void of line coils, that are ever present with larger diameter monofilament and fluorocarbon lines.

Line Twist - With baitcast fishing reels, because the line is retrieved in a direct line from the lure or bass to the spool, there is no line twist. With a spinning reel, if you're reeling as a bass is also taking line out, you will likely create three or four line twists for each complete rotation of the handle.

of which there are three types when talking about baitcast fishing reels, are necessary to control the speed of the spool to avoid overruns and backlash. 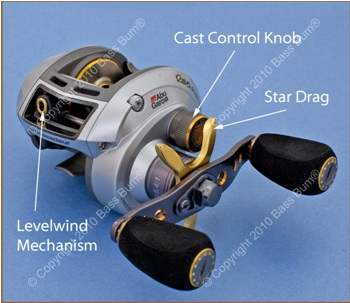 are found on the side plate along side the handle of a reel. It's usually a knurled, flat topped knob. This device tightens the tension on the spool which serves to slow its turn speed but is not classically a brake. These knobs are used to complement to the centrifugal brakes.

are, surprise, the star shaped pieces found positioned just inside the reel handle. These are turned to either increase or decrease the amount of pressure required to pull line from the spool. In essence, the drag mechanism acts as a friction clutch accomplished by a set of stacked washers applying friction to the spool. When fighting a fish with power and weight greater than the line this prevents line breakage. 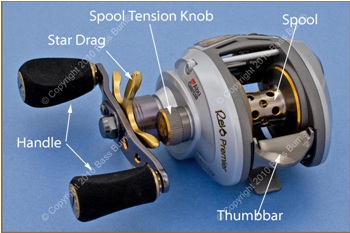 on baitcast fishing reels can be narrow, the predominant style, or wide. They are most often made of aluminum and sometimes graphite. Baitcast reels are usually constructed to facilitate spool exchange via a removable side plate, the same used to access the centrifugal brake block spokes.

mechanisms are located at what I consider to be the back of the reel, though some say it's the front. I don't get that, but nevertheless it's found immediately in front of your hand and behind the spool in the most logical place for easy thumb access. The thumb bar is depressed to unlock the spool and thumb pressure applied to the spool to prevent its turning.

are devices found on the "front" of the reel, my front, I don't care what you other guys call it. Line runs from the spool through the hole of a small fixture, a line guide, affixed to a rod covering a worm shaft. As the reel's spool turns so does the worm gear that moves the line guide back and forth across the rod. In so doing line is deposited evenly across the pool.

serve the obvious purpose of reeling in line by turning the spool as it is cranked. It's interesting to note, however, that reel handle length impacts power and speed. Basically, the longer the handle arms the more power can be generated. The shorter they are, the greater the speed generated though power is reduced. 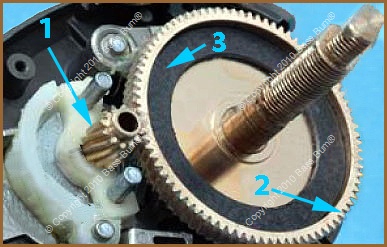 which are inside the reel and out of sight, are the heart and soul of baitcast fishing reels or any reel for that matter. With baitcasting reels they tend to be stronger and more powerful than spinning reel gears as they are positioned on a parallel axis. There is a main drive gear and a smaller pinion gear which mesh to drive the spool and levelwind mechanisms.

compliment the gears in a reel by facilitating the smooth revolution of the rotating shaft that supports the handle and gear train which in turn causes the spool to revolve.

one of which is indicated by #3 above, provide a "friction clutch" that slows the spool but also allows a restricted degree of rotation in order to let out line under pressure. Washers are aligned in a series of adjacent washers on the shaft of the main gear. To these washers there can be applied varying degrees of pressure. In the case of baitcast fishing reels it's done with the star drag device. There are several different drag set ups depending on the manufacturer but most involve a series of fiber and metal washers which spin against each other when the drag slips.

Want The Ultimate Performance From Your Baitcasting Reel?

You Better Tune It!

If you've tried bait cast fishing reels and experienced nothing but frustration, as have I, you will make life a bit easier and fishing more fun if you learn why and how to properly adjust a bait cast reel's settings.

You read above of the many different features and components that characterize baitcasting reels. Each must be "adjusted" so they work in compliment with one another and at their maximum performance levels for the type line, lure and weather conditions in which you may be fishing. The where, when and how details of baitcasting reel adjustment are discussed in detail in a separate article in this site.